Take a photo. Take a stand.

On August 30, the International Day of the Disappeared, the New York Committee for Human Rights in the Philippines (NYCHRP) will bring attention to the thousands of Filipinos who are victims of enforced disappearances in the Philippines. The International Day of the Disappeared on August 30 is a day created to draw attention to the fate of individuals imprisoned at places and under poor conditions unknown to their relatives and/or legal representatives, or victims of enforced di

sappearances. Imprisonment under secret or uncertain circumstances is a grave violation of some conceptions of human rights as well as, in the case of an armed conflict, of International Humanitarian Law.Under the current President of the Philippines, Benigno “Noynoy” Aquino III, there have been 11 cases of Enforced Disappearances in the Philippines.Since the Arroyo Regime (2001-2010), 205 are still missing. The families seek justice, the Philippine government must be pressured to SURFACE THE DISAPPEARED and END IMPUNITY NOW!We demand that these victims are surfaced and their perpetrators are brought to justice.

Join to take a photo and stand in solidarity with the thousands of families still looking for their loved ones. Your photo will be viewable at www.nychrp.info

This event is endorsed by BAYAN USA, Anakbayan-NJ, Anakbayan-NY, Filipinas for Rights and Empowerment, Action 21 and ILPS US NE. 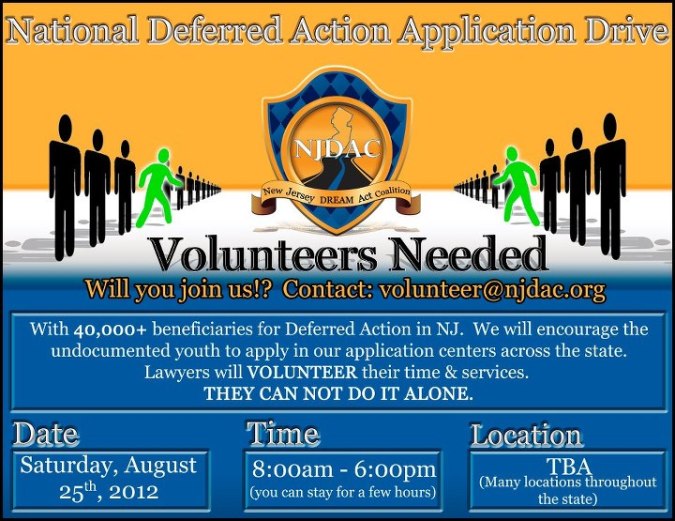 Immigrant youth that meet certain requirements are eligible to apply for Deferred Action from deportation as well as for work authorization permits beginning August 15, 2012. United We Dream, a national organization committed to lobbying for the DREAM Act and supporting undocumented students, has called for a National Deferred Action Application Day on August 25th. The NJ Dream Act Coalition (NJ DAC), an affiliate of United We Dream, is organizing and training volunteers to assist youth

in completing said application at no cost. Sadly, a few attorneys and notary publics are taking advantage of the great need for relief among this population and charging exuberant rates. Please answer this call for volunteers and forward it to fellow organization members.

Supervising attorneys from the Center for Social Justice of Seton Hall Law, law students from the Women’s Law Forum of Seton Hall Law, as well as students from the LGBTQ Resource and Diversity Center at Rutgers, have committed to co-sponsor this event with NJ DAC. The event will be held on Saturday August 25, 2012 in rooms 255-7 of the Paul Robeson Cultural Center of Rutgers-Newark, 350 Dr. Martin Luther King, Jr. Blvd, Newark, NJ. Volunteers will receive training from 8:00am – 10:00am to assist applicants with the Deferred Action application from 11:00am to 5:00pm. Volunteers may provide assistance in shifts or for the full day.

An estimated 40,000 youth may be eligible for Deferred Action in New Jersey alone. The NJ DAC has announced this event on the NJ DAC website, Facebook, Univision and posted flyers throughout NJ; so a large number of hopeful applicants are expected. We need your help to ensure that every eligible immigrant receives competent assistance without falling victim to scams. Volunteering for the Deferred Action Application Day is another way you can contribute to the work of promoting social justice and to ensure that eligible applicants can contribute fully to our society. Our diversity and acceptance of fellow human beings is part of what makes our country great.

To register as a volunteer please visit here: http://www.njdac.org/volunteer.php

PLEASE help get the word out! Share this event and information with your community, friends, and family! Even if not to volunteer PLEASE come to receive FREE legal help to fill out the application!

For more information or for any questions please contact me at 201-214-9571 or GiancarloT@NJDAC.org

WHAT: Join FAHSI LYFE for it’s second annual open mic! Come with songs/poems/dances/anything and show off your talent on our stage. We’ll also be collecting stuff to send to the flood victims in the Philippines through Bayanihan Relief. Please bring whatever you can spare that could be of use: money, clothes, cannned food, first aid supplies, batteries, flashlight, tooth burhses, tooth paste, soap etc…

For more info and to rsvp, please click here 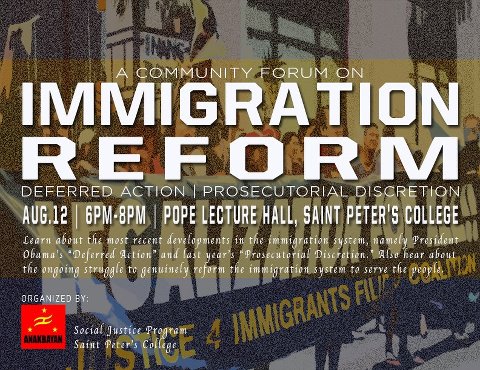 What is Deferred Action? What is Prosecutorial Discretion? Legalization for All?

Learn about the most recent development in the U.S. Immigration policy, particularly President Obama’s Deferred Action and Prosecutorial Discretion. Also learn about the ongoing movement to genuinely reform the immigration system into one that truly serves the people.

Why: Currently, 4,700 Filipinos leave the Philippines every day to look for jobs abroad. The U.S. remains to be the primary destination of migrant Filipinos. There is an estimated 5 million Filipinos in the US, where 1 million are undocumented. An alarming number of labor trafficking cases have emerged within the past year, and undocumented youth have yet to come out of the shadows. This phenomenon is testament to the urgency of addressing the issue of immigration reform in our communities.

It is essential that we learn about the recent developments in the nation’s immigration policies, particularly the most recent “Deferred Action” and last year’s “Prosecutorial Discretion” in order to empower ourselves and to uphold our rights as im/migrants in the United States.

FREE LEGAL CLINIC WILL BE FACILITATED BY ASIAN AMERICAN LEGAL DEFENSE AND EDUCATION FUND (AALDEF) THROUGHOUT THE PROGRAM. 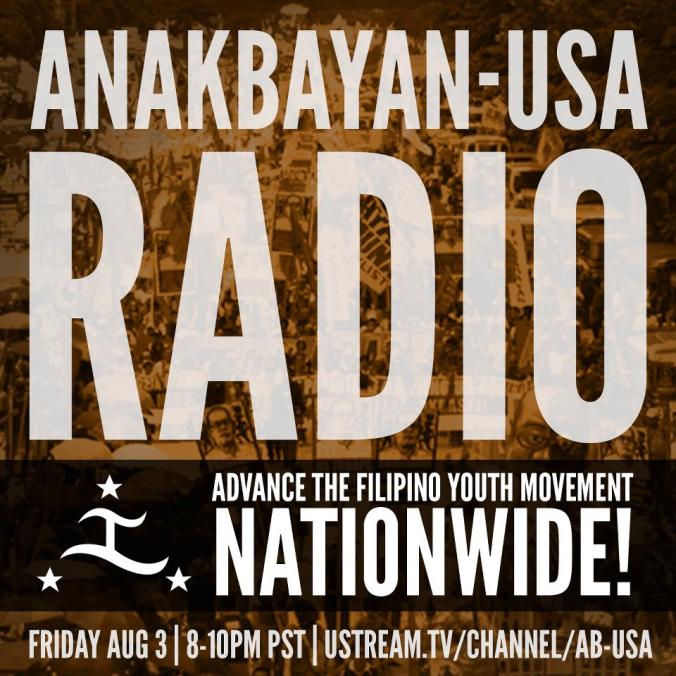 Why: Check out the only national Filipino youth online radio show that broadcasts the voice of the Philippine struggle for national liberation, genuine people’s democracy and social change!

Hear updates on the ground from different chapters in the US, progressive culture, and learn more about the growing Filipino youth movement in the Philippines, US and all over the world!

We are calling on the youth and the community to join Anakbayan on May 1, 2012, 12 noon at Union Square as we celebrate International Labor Day.

What: Rally and march for workers and immigrants’ rights

Why: Every year we celebrate the victories and struggles of workers and immigrants. This year we will be raising the issue of  the Florida 15, Arizona 34 and other labor trafficking cases in the Filipino community. We will also be linking this to the overall struggle of workers and migrants all over the world.

*Wear a red shirt and look for the Anakbayan flag

For more information please email us at anakbayan.nynj@gmail.com 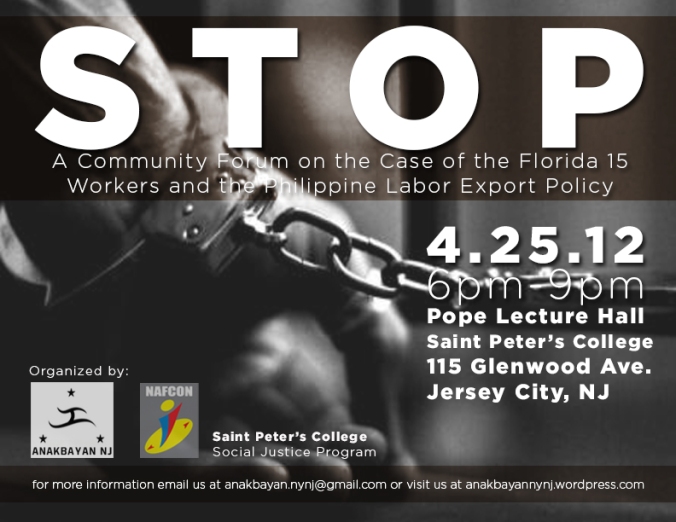 STOP TRAFFICKING OUR PEOPLE!
A Community Forum on the Case of the Florida 15 and the Labor Export Policy

Join Anakbayan New Jersey and the community for a Forum discussion as we raise our own awareness on Human Trafficking & The Labor Export Policy, & to take a stand with YOU as ONE!

At this Forum you can expect:
a. To learn about the case of the Florida 15, Human Trafficking, Labor Export Policy and other issues related to it
b. To meet, share, & discuss with others about your opinions
c. To find out WHAT WE CAN DO ABOUT IT as a Community!

Drinks & Refreshments will be served!

Thanks in advance for your support! Hope to see you all there!

The Revolutionary Student Coordinating Committee (RSCC), NYC calls on progressive youth and students to join a Contingent Against Educational Genocide for the March 1 National Day of Action for Education.

Convene at 1:45 PM, Thursday, March 1 at the intersection of Duane Street and Elk Street in Manhattan near the African Burial Ground. Look for the banner that says, “STOP EDUCATIONAL GENOCIDE AGAINST BLACK & BROWN YOUTH”. We will then march to 52 Chambers Street for the start of the citywide action. Take the 4, 5, 6, J, Z trains to Chambers Street / Brooklyn Bridge-City Hall, or the R train to City Hall.

Because NYC schools fail to prepare 87% of Black and Latino students for college, according to official stats.

Because the NYPD arrests an average of five students everyday in school, 90% of them Black and Latino, and school policies increasingly put our youth on a pipeline into prison.

Because the NYPD murdered 18-year-old Ramarley Graham inside his own apartment in the Bronx and then detained his grandmother for five hours at the precinct.

Because the NYPD conducted a record-high of more than 680,000 stop-and-frisks last year, 87% of them targeting Black and Latino people.

Because the US criminal injustice system keeps about 2.5 million people behind bars and another 5 million under supervision. More Black men today are in prison, on probation, or on parole than were enslaved in 1850.

We charge genocide, because the system is killing our communities with its schools, its police and its prisons. Schools are closing. Tuition is rising. Everyday, our people are disrespected in the classrooms by Eurocentric teachers and in the streets by rampaging cops. The same system that oppresses us in the hood oppresses our homelands – Puerto Rico, the Dominican Republic, Mexico, Latin America as a whole, the Philippines and many other places that suffer from US imperialism.

These conditions must be put to an end. We must organize the youth and students to fight for the most dispossessed, exploited and oppressed sections of our communities. We must unite our communities to fight for survival against genocide. We must struggle for fundamental transformation led by those with nothing to lose and a world to win.

Join us in a Contingent Against Educational Genocide on the March 1 National Day of Action for Education to demand an end to the killing of our communities by the schools, the police and the prisons.

A fundraiser for survivors of Typhoon Sendong and other natural disasters in the Philippines. Proceeds will go towards Bayanihan Alay sa Sambayanan or BALSA-Mindanao, a grassroots relief effort organized by different people’s organizations, institutions and churches in Mindanao.

This benefit will be a showcase of a wide range of local talent including dance, spoken word, hiphop, singing, etc. There will also be a 50/50 raffle, silent art auction, and more fun activities.

B-BOYS AND B-GIRLS WANTED! There will be a dance off starting at 9pm.

Thank you and spread the word! We hope to see you all there!

R2R: Road to Recovery benefit concert is part of a national effort led by the National Alliance for Filipino Concerns’ Bayanihan Disaster Relief and Rehabilitation Program.  It aims to raise funds for the typhoon survivors and, at the same time, raise critical issues around the environmental degradation that caused so much devastation and lives.  All the proceeds will go towards Bulig Alang sa Mindanao or BALSA-Mindanao, a grassroots relief effort organized by different people’s organizations, institutions and churches in Mindanao.

The said benefit show aims to put together a family-friendly event for the entire community to enjoy. The concert will showcase a wide range of talents from the local Filipino community. Performances include live musical performances, spoken word, and Filipino cultural dances.

“As a Filipino-American, I believe it is important to stay in tune with your heritage through keeping up with current events, incorporating Filipino values and traditions in your lifestyle, and especially helping out your kababayans through community events. So I invite everyone to come to this wonderful benefit show and help out,” said Goeffrey Laurel of Anakbayan New York.

For more information about R2R: Road to Recovery, email Anakbayan NY  at anakbayan.nynj@gmail.com, visit their website at www.anakbayannynj.wordpress.com. For information about BALSA-Mindano, visit www.balsamindanao.net