As part of the “Stop Trafficking Our People” or STOP Campaign, Anakbayan New Jersey will be holding a screening of Modern Heroes, Modern Slaves.

From NYC: take Path from 33rd > get off at Exchange Place and Take Light Rail to West Side Ave. > Walk to Culver St. towards NJCU

From NJ: Take Bus 80 or Bus 10 from Journal Square and Get off at Culver Ave.

Modern Heroes, Modern Slaves (1999) Directed by Marie Boti Each day, thousands of women leave under developed countries like the Philippines to seek work as domestics in more prosperous places. What little money they earn they send home to their families. This crucial source of revenue to their country’s economy has prompted the Philippine government to call these contract workers “modern-day heroes.” Starting from the case of Flor Contemplacion, the Philippine maid hanged in Singapore for the killing of her abusive employer, this film shows the human and sometimes tragic side of this organized labor trade: failed marriages, family break ups, and exploitation and abuse at the hands of unscrupulous employers.

KATARUNGAN (Justice): A Forum on the Case of Melissa Roxas and the Human Rights Situation in the Philippines

“KATARUNGAN (Justice) is a forum organized by BAYAN-USA Northeast to raise awareness about the human rights situation in the Philippines and what can we do about it.

Also, get to know Melissa Roxas and her ordeal as Filipino-American human rights activist/health worker who became the first US citizen to be a victim and survivor of enforced disappearance/abduction and torture in the hands of the Philippine military.”

For more information about Melissa Roxas and the human rights situation in the Philippines, please visit: http://justiceformelissa.org/

“THE PHILIPPINES IS NOT FOR SALE!”– BAYAN USA 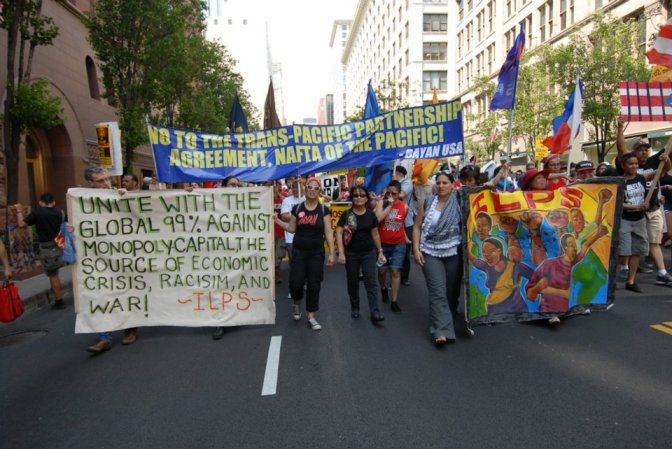 BAYAN-USA, a national alliance of progressive Filipino organizations, commenced the month of June by mobilizing the Filipino community to voice their outrage and concern to the Philippine President Benigno “NoyNoy” Aquino III and Vice President Jejomar Binay on their respective visits to the United States.  BAYAN-USA condemns the Aquino administration for pushing policies that have prioritized opening up the Philippine economy to mainly cater to foreign economic and U.S. military interests, as well as the interests of the ruling classes in the Philippines at the expense of the rights and dignity of the majority of poor Filipinos. Binay visited Los Angeles this past June 2nd, while Aquino is slated to meet with US President Obama this Friday, June 8.

Binay declared his visit to the U.S. was to meet with U.S. Vice President Joe Biden to ask for help in defending the rights of trafficked Filipino teachers in Maryland. However, protesters from BAYAN-USA doubt Binay’s interest in workers’ rights due to the very fact that he was staying at the Hilton LA Airport, a boycotted hotel by a hotel workers union, which includes Filipino members. The union called for a boycott to ensure that the workers’ rights to unionize be upheld as well as the fair treatment of workers across the board.

President Aquino, on the other hand, will be meeting Obama at the White House to discuss increasing U.S. military presence in the Philippines.  Aquino may discuss the Philippines signing onto Obama’s Trans-Pacific Partnership Agreement (TPPA), a U.S.-led neoliberal free-trade agreement – often referred to as the NAFTA of Asia – which will further liberalize Philippine markets to deregulate foreign business ownership, clearly violating Philippine sovereignty and self-determination. Many economists have pointed to the TPPA’s design to secure US economic dominance in the Asia-Pacific region, while isolating super rival China’s emerging economic influence.

With every US military shift dictated by a US economic agenda, BAYAN-USA recognizes these meetings as Aquino’s subservience to U.S. economic and military interests, as he allows the increase of U.S. military presence in the Philippines in exchange for the tripling of U.S. military aid to the Philippines.  His visit is in line with the Pentagon’s recent announcement of a  60% strategic shift to the Asia Pacific region set to be completed by 2020. As the Obama administration uses military bullying to dictate and project its economic power in the Asia-Pacific region, it continues to justify its actions by sowing an anti-China scare campaign reminiscent of Cold War-era messaging.

Filipinos in the U.S. and in the Philippines declare, “The Philippines is NOT for sale!” and will conduct protest actions in both countries to condemn the U.S.-Philippine military alliance, which will only perpetuate more human rights violations against the Filipino people and aggravate the threat of war, putting the Philippine nation in direct danger of unwarranted military action.

Join BAYAN-USA in nationally-coordinated protest actions to demand that President Aquino uphold Philippine sovereignty and protect the rights and welfare of the Filipino people!

THE PHILIPPINES IS NOT FOR SALE!

NO TO  THE TRANS-PACIFIC PARTNERSHIP AGREEMENT!

DOWN WITH U.S. IMPERIALISM!

NEW YORK — This coming Sunday, June 3, 2012, the National Alliance for Filipino Concerns (NAFCON) and BAYAN-USA will be joining the annual Philippine Independence Day Parade once again to present the pressing issues that Filipinos in the United States are experiencing and to make the community aware about these issues and how they can contribute to address these.

This year, the alliances and their member organizations will tackle once more the issue of human trafficking, which has become even more rampant during the past few years, with victims coming out in groups and speaking out to tell their experiences, such as the Florida 15, Arizona 34, Orlando 18, Sentosa 27++ and many more.

Most of them have been recruited from the Philippines and brought into the United States with the employers promising them jobs but ended up sending them in either a different workplace or to work within terrible conditions. They were given false hopes for better lives and employment, but most of them eventually lost their status due to employers’ negligence and fraudulent acts. Some were even subject to detention, removal proceedings and deportations, which none of them have ever hoped for.

In line with the theme of this year’s Philippine Independence Day Parade, “Ang Bagong Pilipino, Bagong Kalayaan, Bagong Layunin, Bagong Pagkakaisa” (The New Pilipino, New Independence, New Goal, New Unity), NAFCON and BAYAN aim to awaken the minds and hearts of Filipinos in the United States on these issues and become the new Filipino, who will fight for the rights of migrant workers and who will not let injustices plague our country and fellow men.

These progressive alliances aim to fight for a new Philippines that is free of debt, exploitation, corruption, landlessness and one that will have jobs in the home country so Filipinos need not to leave, sell cheap labor to other countries and get separated from their loved ones; a Philippines whose government takes responsibility and fights to end Labor Export Policy (LEP) and addresses the needs of its people and can stand up on its own and free from the dictates of super powers. Only then, if our beloved motherland has reached this stage, can we say that genuine freedom and independence has been truly achieved.

So this Sunday, NAFCON, BAYAN and their member organizations enjoin Filipinos to march for real independence and to unite in ending these forms of exploitation and abuses and in making the perpetrators of these inhumane practices accountable to the people.

Meeting place will be at 37th Street between Madison and Park Avenues, 11am on Sunday, June 3. Let’s wear our RED shirts!

A meaningful Philippine Independence Day to all!

NO TO CRIMINALIZATION AND ILLEGALIZATION OF IM/MIGRANTS!

NO TO LABOR EXPORT POLICY! CREATE JOBS AT HOME!

JUSTICE FOR VICTIMS OF HUMAN TRAFFICKING AND ALL MIGRANT WORKERS!

We are outraged by the brutal assassination of Ernesto “Ka Erning” Gulfo, urban poor leader and community organizer of Catmon, Malabon on May 30, 2012.  We condemn the systematic and continuous terror campaign of the Aquino regime against our people back home in the Philippines.  Ka Erning’s murder adds to Aquino’s growing record of political killings.  This clearly shows that Aquino is perpetuating the legacy of the previous President Arroyo through his utter disregard for human rights.

Ernesto “Ka Erning” Gulfo is an urban poor leader and community organizer of Catmon, Malabon.  As the chairperson of the local alliance of people’s organizations against the demolitions of urban poor communities, Alyansa Kontra Demolisyon (AKD) – Malabon, he was organizing the community to defend itself against a demolition that would displace over 1,500 families.  Ka Erning had a deep grasp of the community’s problems and the Philippine government’s devious schemes to displace urban poor communities in the name of “development”.  He worked tirelessly to organize local residents to stand up and defend their basic human rights.  He showed that the way to truly change these conditions was to take collective action and struggle for national democracy.  Because of this, he became a prime target of state-sponsored terrorism.  On the morning of May 30, two unidentified men entered his home and shot him twice in the chest. Ka Erning is now the 77th victim of political killings under the Aquino administration.

As soon as we found out about his murder, it immediately sent shockwaves throughout the Filipino youth movement in the US.  Many of us had the opportunity to meet Ka Erning on our exposure trips to the Philippines.  He was a humble and warm-hearted comrade, father, grandfather, and laborer who selflessly welcomed community members and exposurists into his home.  Ka Erning was a wise teacher to a generation of Filipino youth and student activists here in the US.  He generously shared his years of experience and insightful lessons as an organizer and activist.  He emphasized that in order to effectively organize, we should not only hold meetings, but be on the ground in the community and immerse ourselves in the lives of the masses.

The struggle of Ka Erning and the urban poor population of the Philippines resounds strongly to us, who are part of the Filipino diaspora. The poverty and injustices that cause the internal migration and displacement of the urban poor in the Philippines are the same conditions that force thousands of us to migrate abroad daily.

Under the current Aquino regime’s Public-Private Partnership “development” scheme, violent demolitions and human rights violations are an integral part of the ruling class’ ruthless drive to acquire property and profit.  Even here in the US, communities are increasingly under threat of displacement by the ruling 1% through the gentrification of working class and immigrant communities, as well as the widespread foreclosure of homes by big banks.

Ka Erning fought for a brighter future for our people. He will live on forever in the hearts and memories of the Filipino people here in the US as a martyr of our people’s struggle for dignity and genuine liberation. We will continue his unfinished struggle.

We call on our kababayans to emulate Ka Erning’s shining example.  Let’s organize and struggle for a Philippines where human rights are upheld and all our people will have homes and a life with dignity.  Struggle for national democracy until victory!

Struggle for national democracy in the Philippines!