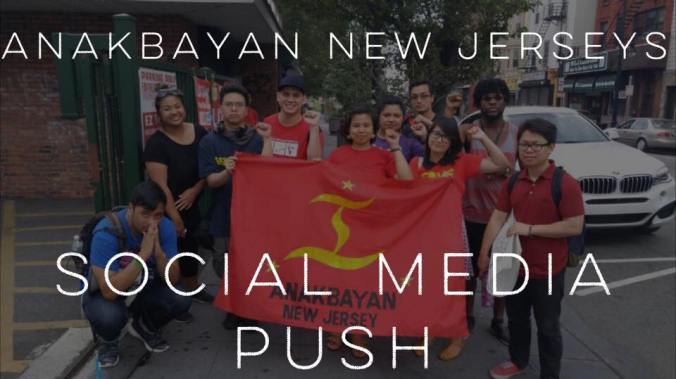 Warm militant greetings to you all! Recently Anakbayan New Jersey has been in the process of revamping our social media outlets and providing us with new opportunities to spread the work of Anakbayan New Jersey! Hope to connect with you all in many different levels and forms! 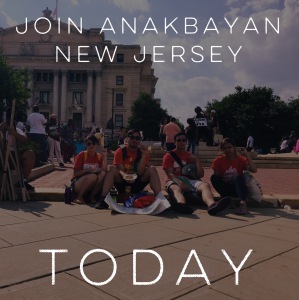 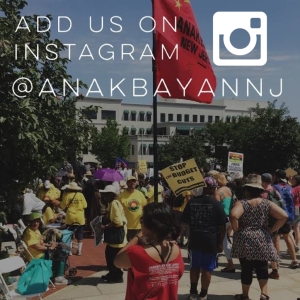 The Straight Path to Corruption and Criminality: OUST AQUINO at his Last State of the Nation Address 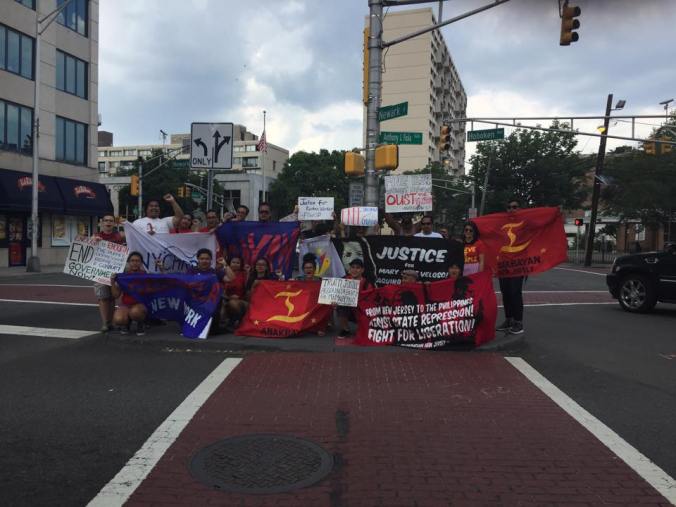 Anakbayan NJ, alongside member organizations of BAYAN-USA North East refuted the US-Aquino regime’s final State of the Nation Address through a two-day protest in Jersey City, NJ and Manhattan, NYC. Delegates also delivered the guilty verdict of the International Peoples’ Tribunal to the Philippine consulate to highlight the lies President B.S. Aquino delivered hours beforehand. B.S. Aquino’s has continued the legacy of egregious criminal acts against the Filipino people of the administrations predecessing him and enough is enough!

On July 27, 2015, President B.S. Aquino again tried to pull the wool over the eyes of the Filipino people. However, after five years of empty promises and lies, the people have poured into the streets in the thousands, across the world to declare that enough is enough. His so-called straight and narrow path of reforms has only led to literal death and destitution for our people. SONA 2015 is a mere veil to ever-worsening crisis of the semi-feudal and semi-colonial society of our homeland.

Throughout his address, B.S. Aquino continued to distance himself from the undeniable corruption of his administration. When he first mentioned “Government Owned and Controlled Corporations,” (GOCC) B.S. Aquino claimed no responsibility for the monetary abuse facilitated by the appointees to these GOCCs. Yet, in a May 13th article, President Aquino “order[ed] a review of their bonuses to ‘maximize’ their lawful benefits.” People question how he can spout such contradictory statements when he siphones these funds for his cronies, but this was clearly foreseen from his haciendro bureaucrat capitalist background even from the start of his reign.

B.S. Aquino dared to continue with the National Budget, alleging that projects that were already completed were still receiving funding because of the approval of the General Appropriations Act in 2007. He feigned concern that these funds would be funneled into wrongful channels, yet the money was already sent into the pockets of his cronies. With the upcoming election, we must collectively reject corruption in government agencies for election fundraising and this barkadahan system of governance. There is no accountability of high ranking officials of the government, and as a people, we must make an example of B.S. Aquino by exposing and opposing his criminality and corruption.

As Filipino youth and students in the U.S., we are continually baffled by the expected regime’s empty rhetoric. From the Public Private Partnership and Conditional Transfer to lack of social services and widespread contractualization and low wages, we cannot allow B.S. Aquino to fail our kababayans another moment more. We condemn foreign intervention, whether from the U.S., Japan, or China and condemn the continued cycle of bureaucrat capitalist presidences. It is time we take action to our sentiments because five years has been too long. Aquino must be ousted and we must institute a government for the people!

Onward with the people’s national democratic struggle for genuine reforms!