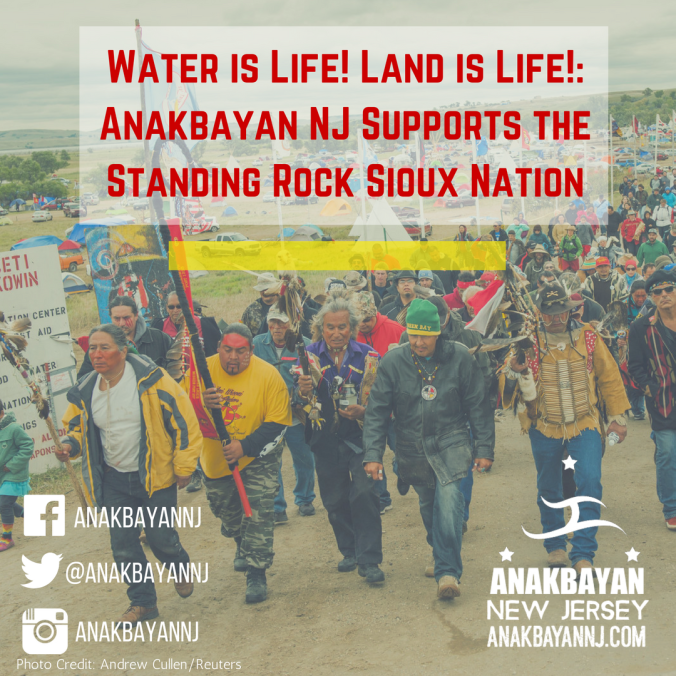 Anakbayan New Jersey stands in solidarity with all indigenous people and their fight to defend ancestral land. Join us today, on Indigenous People’s Rights Day, at Water is Life! Jersey City Stands with Standing Rock, a rally and prayer vigil led by the New Jersey Philippine Solidarity Committee. We enjoin in solidarity with the organizers of this event and the indigenous-led resistance against the Dakota Access Pipeline.

As part of a movement that seeks to fight imperialism, feudalism, and bureaucrat capitalism in all of its manifestations, Anakbayan NJ understands the importance of asserting self-determination and being able to preserve the land and the natural resources that are depended on by so many for survival. To respond in anger is just when those with power take away life-sustaining resources, even if it costs lives. We know that the imperialist’s only priority is to how to maximize profit at the expense of others; the United States is built on the massacre of indigenous people and the enslavement of Black people. Imperialism in the form of neoliberalism allows for the government to abandon their responsibility to their people and, instead, passes it along to private companies; the free market that capitalists and governments have created and are thriving off of; and the repression of groups and individuals that choose to speak out against these human rights violations.

The struggle for indigenous sovereignty can not only be seen in Standing Rock but also in the Philippines. This is especially the case in Mindanao, where Lumad people and other indigenous groups continue to resist against bureaucrat capitalists and the military who continue to exploit their resources and their way of life. About one-half of the mines in the Philippines are located in Caraga, and seven foreign large-scale mining companies either have mines in the region or are working with domestic mining companies already present in Caraga. The outcome is degradation and contamination of the land and water that indigenous people in the Philippines rely on for maintaining their livelihood. We also denounce the state repression taking place in North Dakota against the DAPL, which only enables the militarization of sacred land. The extraction of profit-yielding resources outweighs the consideration of human life.

Through our “Stop Lumad Killings! Save Our Schools!” campaign, we fight against the militarization of Lumad communities and their schools as a way to extract minerals from their resource-rich lands and recognize the importance of the Lumad schools. These schools provide their children with a relevant education — something that the American school system is currently lacking. Not only do these students learn mathematics, reading, writing, and farming, but they also learn about their history of resistance and their rights. To this day, the military and paramilitary continue to occupy their communities and harass teachers, community members, and people’s organizations who work alongside them.

Anakbayan NJ recognizes that the situations in both Standing Rock and the Philippines are manifestations of imperialism that exploits our people around the world. Imperialism allows for the extraction of minerals from resource-rich lands in the Global South for the benefit of those here in the Global North, leaving lands taken away from indigenous peoples and areas rendered unlivable. Imperialism also creates the conditions in which working-class people are forced to take on low-wage jobs — not unlike the jobs responsible for the creation and success of the DAPL — in order to survive despite the wages being unlivable. Imperialism allows for the stagnation of minimum wages and the exponential rise of cost of living. Imperialism also gives the seventeen banks who invested in the Dakota Access Pipeline the opportunity to do so — and for them to protect their assets through attack dogs, armed officers, sound-cannon trucks, and crop dusters that spray pesticides over the land.

As Anakbayan NJ, we call for an end to the exploitation of our lands, our people, and our human rights.  We also demand investment into our communities so that our people are able to access a comprehensive and relevant education; important social services; and a living wage that is not struggling to compete with the rising cost of living.

FROM NORTH DAKOTA TO THE PHILIPPINES, END MILITARIZATION! FIGHT FOR LIBERATION!
WATER IS LIFE! LAND IS LIFE! DEFEND ANCESTRAL LAND!
SAVE OUR SCHOOLS! EDUCATION IS A HUMAN RIGHT!

There was an error retrieving images from Instagram. An attempt will be remade in a few minutes.