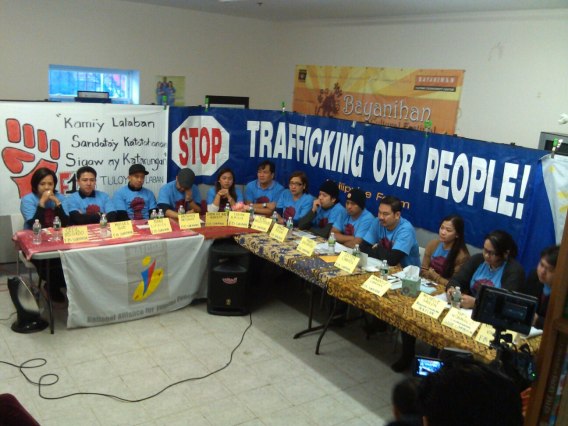 The “Florida 15” at a Press Conference in Woodside, NY. Photo by Jonna Baldres

On February 18, the “Florida 15” (F-15) labor trafficking survivors announced the approval of their T-Visas and issuance of employment authorization cards in a press conference with Atty. Felix Vinluan and members of the Stop Trafficking Our People (STOP) Task Force led by the National Alliance for Filipino Concerns (NAFCON) at the Bayanihan Filipino Community Center in Woodside, NY.

The F-15, surrounded by community organizations and supporters, declared their continued commitment to speak out against labor trafficking and to demand justice for other migrant workers experiencing unfair, slave-like labor conditions in the United States.

The “Florida 15” Inspires Us

Anakbayan congratulates the “Florida 15” and the STOP Task Force for reclaiming the workers’ legal right to live and work in the United States. The F-15’s former employer and owner of San Villa Ship Management Co., Jose “Jojo” Villanueva, deprived them of that right when he failed to renew the workers’ H2-B visas without their knowledge, leading them to overstay in the US without proper documentation until the approval of their T-Visas in the beginning of February 2013.

For the F-15, the truth in their shared experiences is the only weapon against the injustices that they suffered. They sacrificed time with their families, safety and security, and even risked unemployment in the name of exposing the plight of migrant Filipino workers. They chose to fight rather than to surrender, despite the obvious challenges of going public with their case.

For these reasons and more, Anakbayan is grateful for the inspiration that the F-15 has given its membership and the community. The F-15 opened their homes to us, shared their stories and their goals with us, and most importantly, helped build people power among the Filipino community. They proved that youth and students united with the workers in struggle makes for a strong movement that genuinely responds to the interests of the broader population.

The efforts to achieve justice for the F-15 are far from over. Villanueva and his cohorts have yet to pay back-wages and costs to all damages imposed on the trafficked workers. Villanueva is currently in hiding from several civil lawsuits filed against him.

Anakbayan is calling on the community to hold Villanueva accountable, and make him face the allegations against him in court. If you have any information regarding Jose “Jojo” Villanueva’s whereabouts, please contact Michelle Saulon, NAFCON Regional Coordinator, at michelle.saulon@gmail.com or call (347) 867-1550.

“Modern Heroes”, Slaving Without Protection From the Government

The F-15 is only one group out of the increasing number of Filipino workers coming out of the shadows of labor trafficking and modern-day slavery. NAFCON has been handling over a hundred individual cases of human trafficking since its founding in 2003.

Anakbayan challenges the Aquino government to be accountable for the gross failure of the Philippine Overseas Employment Agency (POEA), Overseas Workers Welfare Administration (OWWA), and the Philippine Embassy and Consular Offices across the United States to protect and uphold the rights of Filipino workers.

The estimated 12 million Filipinos living abroad are hailed as “Modern Heroes” because of their significant contributions to the Philippine economy. Overseas Filipino Workers’ (OFWs) remittances accounted for 10% of the Philippines’ Gross Domestic Product (GDP) in 2011. Additionally, OFWs sent $17.3 billion in remittances from January to September 2012 alone.

Despite these figures, OFWs run the risk of being involved in unfair labor operations, various forms of employer abuse, detention and deportation, while also dealing with family separation for indefinite periods of time.

Anakbayan demands that the Philippine government take its duty to protect the rights and welfare of OFWs seriously. We cannot allow any more instances of worker exploitation, abuse and death among the people who contribute so much to the wealth of our nation but receive very little in return.

An average of 4,600 Filipinos, coursed through government agencies such as the POEA, decide to leave the Philippines each day to take their chances in other countries in order to provide for the education, healthcare and livelihood of their families.

The Philippine government’s weak attempt at industrializing the country is by selling our people and resources to foreign investors and companies. This has led to low-paying jobs and widespread unemployment at home, compounded by rising costs of basic commodities and privatized social services.

The commodification of the Filipino people as export products to boost the country’s economy has been in place since the 1970s. Anakbayan believes that genuine land reform and national industrialization of vital industries is the only way to truly revitalize the Philippine economy. This will end the nation’s dependence on exporting people and resources for cheap in exchange for expensive imported goods and services that majority of the Filipino people cannot afford or benefit from.

The victory of the Florida 15 is a product of sustained collective action from individuals and organizations that united for immigrant rights.

Anakbayan is urging Filipino-American youth to take a stand against labor trafficking and modern-day slavery. Get involved in the Stop Trafficking Our People Campaign by contacting Yves Nibungco, Coordinator of the STOP Task Force and Secretary General of Anakbayan NJ, at yvesnibungco@gmail.com or call 201 253 5662.

Join Anakbayan’s “Youth for Immigrant Rights” contingent at the International Workers’ Day March in Union Square, NYC on May 1st, and the Philippine Independence Day Celebration on June 2nd.

The youth must be active participants on the side of the workers and not just neutral spectators to these injustices. As inheritors of this society, we are in the position to critique the Philippine government and the global system that forces our people to endure such hardships just to survive. As inheritors of this society, we are also in the best position to push for, and implement, alternatives that would ensure a brighter future for immigrant communities in the US.###

Community organizations are urging concerned citizens to pack the City Hall on Wednesday to show support for the City Resolution. A brief rally will be held in front of City Hall at 6pm, before proceeding to the public hearing at 6:30pm. Participants are invited to wear caps and gowns to symbolize the dream of higher education.

Please bring signs and placards that say:
Pass the Resolution for Tuition Equity
Tuition Equity for NJ Dreamers
Higher Education For All
No Human Being is Illegal
You Vote for Equality, We Vote For You
If you or your organization would like to give a 1-2 minute testimony as to why the Jersey City Council should support the City Resolution, please email bmb.sabino@gmail.com with your name, organization/affiliation, and contact information by midnight of Monday, February 25.

WHERE: City Hall, 280 Grove St., Jersey City, NJ 07302WHEN: Wednesday, February 27, 6pm-9pmWHY: The undocumented immigrant population in New Jersey makes up 6.2% of the total state population, making it the fourth-highest rate in the nation. In New Jersey, undocumented immigrants make up 8.6% of the state’s workforce and paid $446.1 million in state and local taxes in 2010. Despite their contribution to the local economy, undocumented immigrants are required to pay the out-of-state tuition rate to attend college, and are ineligible for financial aid and scholarships.The New Jersey Tuition Equity for DREAMers (NJ-TED) Campaign aims to gather enough community support and build people power to demand the implementation of A1659/S2355 and A3509/S2479 from the NJ State Legislature.The city resolution will be the first of its kind to be introduced in New Jersey that supports the NJ-TED Campaign. If approved by the City Council, Jersey City will serve as an example to other municipalities across New Jersey in taking a stand for a person’s right to affordable and quality education, regardless of immigration status.For more information about the NJ-TED Campaign, click here. For more information about the community action at City Hall, please visit the Facebook event page by clicking here. You may also contact Bea Sabino at anakbayan.nynj@gmail.com or 201 779 6886.##