Anakbayan NJ members on an exposure trip in Bukidnon this past summer 2014.

On March 24, 2015, Tata Baito was killed by hired armed guards of Pablo “Poling” Lorenzo, the illegitimate landlord of Montalvan Ranch. Japsem Bagna and Ricky Tumbaga were also severely injured by gunfire and there has been a lack of government response. The three were on their way to plant crops in preparation for the mild El Niño phenomenon, which creates higher temperatures that are unsuitable for farming.

TINDOGA is recognized as true claimants of 630 hectares of ancestral domain, of which Lorenzo’s land is a part of. The Manobo-Pulangihons were displaced after their lease with the government expired in 2009. Since March 16, 2015, with the strength of 200 individuals and four other groups, the Lumads have been reasserting their right to the land through a bungkalan, or peasant protest where they seize the land back and plant crops in it.

Baito, Bagna, and Tumbaga were on their way to the site when Lorenzo’s 20 to 30 armed men opened fire on them. The helpless three could only run from the barrage of Garand, Armalite rifles, and shotguns of their assailants. Reports of harassment and attacks by Lorenzo’s security force have been reported since 2012, but this has been the highest escalation of violence thus far.

In August 2014, two Anakbayan New Jersey members integrated with the indigenous peoples’ communities of TINDOGA members. The exposurists participated in production work, psychosocial therapy, and the feeding program. “We did not just listen to the firsthand accounts of their struggle, but viscerally felt it shaking within our bones. Our outrage in light of these attacks are amplified not only as human rights violations, but because they are attacks on a community that has welcomed us as family and sheltered us in their homes. As Filipinx Americans activists we do not just live and laugh with the Lumads in our privilege to come and go, but we must struggle alongside them, especially now with the heightened violence,” said Joelle Eliza Lingat, Chairperson of Anakbayan New Jersey.

As Filipinx Americans at the fringes of the Philippine diaspora, we must defend the rights of our living ancestors, the Lumads. The indigenous peoples’ of the Philippines experience multiple levels of oppression as a national minority within a country plagued by imperialism, bureaucrat capitalism, and feudalism. Our struggle for national democracy is a struggle for the Lumad people. Return the ancestral lands of the indigenous peoples! 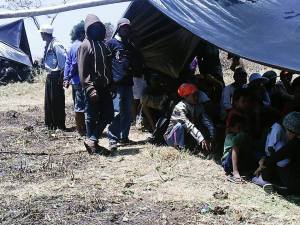 Defend the Defenders; Activism is Not a Crime: Stop the Political Vilification and Harassment of Human Rights & Indigenous Peoples’ Rights Defenders in Ifugao, Cordillera, Philippines

Anakbayan New Jersey condemns the increased political vilification and surveillance of members and leaders of the Ifugao Peasant Movement (IPM), barangay officials, local organizations, and indigenous people’s rights advocates. As activists ourselves, we believe in the basic rights of individuals and organizations to freely express their political beliefs and to advance their peoples’ rights in the Philippines, the U.S., and across the world.

As of the last quarter of 2014, there has been an increase in the ostracization and red-baiting of local people’s organizations as communist fronts or members of the New Peoples Army (NPA). Not only are these accusations false, but they attempt to turn the public against these community advocates as “enemies of the State” or “terrorists.” This is a direct result of the Philippine government’s counter-insurgency policy, Oplan Bayanihan, which continues to uphold a culture of impunity and injustice.

History has shown that increased political vilification is a prelude to illegal arrests based on trumped up charges, enforced disappearance, and even extrajudicial killings. After the Philippine Army’s release of a “Target List,” William Bugatti, one of those listed, was extrajudicially killed on March 25, 2014. It is a grave injustice to demonize these individuals and organizations that have dedicated their lives to empowering the oppressed, poor, and most vulnerable to government neglect through social services and livelihood assistance.

The last person named on this list, Brandon Lee, is of particular relevance to us as a former member of the League of Filipino Students – San Francisco State University. He entered college as an everyday student and left as an activist in service of the people. Not even Filipinx, this Chinese American man found a place within our homeland in a way that very many Filipinx youth in the U.S. have never even engaged with. He has come a long way from his first exposure program to the Philippines as he has permanently moved to work as a defender of indigenous peoples’ rights with his wife and daughter.

However, this is not the story of a single person, or even a single region of the Philippines. It is of a culture of impunity that is plaguing the homeland our families have been ripped from. Political vilification and military repression extends from the northernmost tip of Luzon to the southernmost tip of Mindanao, and in most recent incidents, from Ifugao to Mamasapano. Our very own members of Anakbayan New Jersey have integrated with students whose schools have been bombed and farmers whose lands have been stolen.

There have been too many “final straws.”

It is our duty as Filipinx Americans of the diaspora to stand in solidarity with our Filipinxs back home in our demand of truth, accountability, and justice of the Philippines government and the especially the president, BS Aquino. We also call on the American taxpayers to demand that the US government cut all military aid to the Philippines. We demand an end to BS Aquino’s bloody counter-insurgency campaign, Oplan Bayanihan. We also demand that the Philippine government respect human rights and adhere to international humanitarian law. End the culture of impunity! Long live international solidarity!###

Filipino Youth Stand in Solidarity with the People of Palestine, Demand an End to Apartheid in Israel

Anakbayan New Jersey raises our fists in solidarity with our fellow activists of Students for Justice in Palestine of Rutgers New Brunswick to commemorate Israeli Apartheid Week. We vehemently condemn the Israel state in their apartheid of the Palestinian people. In the same breadth of how the Philippine government creates an apartheid state with their economic policies dictated by bureaucrat capitalism, feudalism, and imperialism, we stand by the Palestinian people as brothers and sisters through our international struggle.

The parallels between our plights as oppressed peoples are numerous. Israel’s discriminatory policies limit resources and access to housing, transportation, and food. We see segregation based upon race and religion as well as forced migration from lands formerly held by Palestinians. The continual occupation of Palestinian lands and bombings of schools and hospitals confirm the human rights violations perpetrated by the Israeli state, funded and supported by the US government. Moreover, border control and militarization of communities restrict the movement and freedom of the Palestinians.

Similarly the Filipinx people are subjected to forced migration, military repression, and economic suppression at the hands of U.S. imperialists. As children of the Palestinian and Philippine diaspora within the belly of this imperialist beast, it is our duty to fight for liberation of our homelands. Anakbayan New Jersey denies the legitimacy of the Israeli government when they continue to create an apartheid state that does not include the Palestinian people. It is only through our collective struggle will we attain collective victory. Long live international solidarity!###