KBKN participants visit with a fisherfolk community and learn about their struggles against large-scale mining in Central Luzon. (Source: KBKN Facebook,https://goo.gl/vI7EXd)

This summer Anakbayan New Jersey (ABNJ) members Nina Macapinlac and Dan Santiago had the opportunity to integrate and serve with different communities in the Philippines as part of the Kapit Bisig Kabataan Network (KBKN) relief and rebuild mission. Along with 25 other Filipino American youth, Nina and Dan travelled through Luzon, Visayas, and Mindanao to gain exposure and contribute to the different struggles and organizing in peasant, fisherfolk, worker, and youth and student communities. They also had a chance to participate in the State of the Peasants Address in Angeles City and the State of the Nation Address in Manila. The ABNJ newsletter team got the chance to learn about these two rockstars’ experiences for the newsletter’s first ever Special Feature! 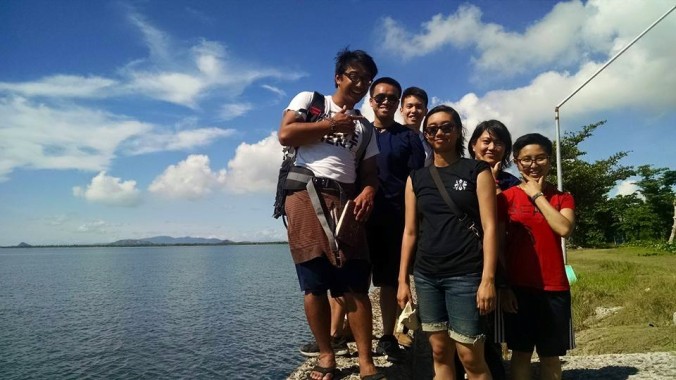 First off, why would someone (like you!) want to go on a KBKN relief and rebuild mission trip to the Philippines? “I wanted to inform my activism here,” said Nina. She also wanted to see the countryside to challenge what she was taught about it growing up. Nina and Dan both expressed that the mission trip was important for them on a personal level as Filipino of the diaspora. “I just wanted to reconnect with my roots, go back to the homeland,” shared Dan.

ABNJ Solidarity Officer Dan Santiago speaks out at the State of the Peasants Address in Pampanga this summer. (Source: Nina Macapinlac)

Afterwards, the team had the opportunity to connect what they learned at the State of the Peasants Address with the peasant community of Hacienda Dolores in Pampanga. Like its name suggests, Hacienda Dolores used to be property stolen by Spain. Nina recounts that one of the peasants’ current struggles are against the land grabbing companies of Leonardo Lachenal Leonio Holdings Inc., FL Property Management Corporation, and Ayala Land Inc. that came in and claimed that they had a title to the land, even though the last title was held by Spaniards as long ago as the 1800s. The community does not know who exactly has been hiring the goons attacking their communities. In the last four years, these hired goons have come in burning or stealing crops as a way of proving the land as non-productive so that local development companies can purchase the land, as per the ineffective Comprehensive Agrarian Reform Program. The local development company has also bought out over 500 family houses, often only after hired goons would threaten and intimidate the families.

“Because they’re barred from their land, a lot of peasants became OFWs [Overseas Filipino Workers],” Nina said. “A lot of children aren’t with their parents and live with their grandparents.” The peasants, displaced from their lands, become migrant workers in places like Saudi Arabia or Qatar. Nina expressed that because of these stories in Hacienda Dolores, she could see a direct link between feudalism and migration: “It starts with the land. If they don’t have land, don’t have a livelihood, then they’re forced to leave.”

Nina and Dan’s team next visited with peasant and fisherfolk communities in Tanauan in Eastern Visayas. Tanauan is 45 minutes outside of Tacloban where Typhoon Yolanda first hit in November 2013, and many residents still have not been able to recover. Under the government’s emergency shelter assistance program, survivors are entitled to PHP 30,000 if they lost all of their livelihood or PHP 10,000 if their livelihood was partially destroyed. However, this program has failed to serve the needs of survivors. Some community members whose livelihoods were fully destroyed only received partial benefits. Those who lived closest to the shores were given bunkhouses and charged  PHP 900,000—the cost of building a bunkhouse, however, is estimated at only PHP 200,000.

After Eastern Visayas, Nina and Dan integrated with the community in Han-ayan, Mindanao. The recent extrajudicial killings of Lumad leaders in this area have left Nina and Dan with heavy hearts. Unfortunately, the community has been facing a long struggle with the military and paramilitary. “We learned about the stories of community leaders getting killed, the paramilitary,” said Dan. “Every few years they would be evacuated.” Nina adds, “Because land is so integral to their culture, if you take the Lumad out of their land, you’re effectively killing their culture.” 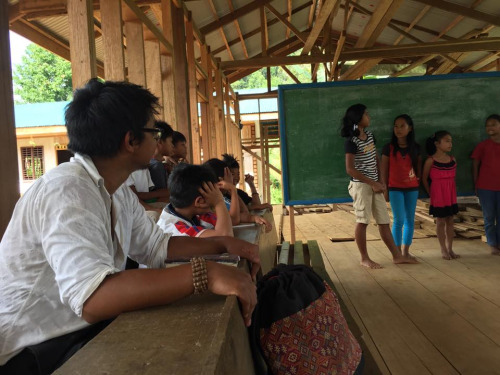 The Lumad school Alternative Learning Center for Agricultural and Livelihood Development (ALCADEV) has continuously been harassed by the Armed Forces of the Philippines (AFP) and paramilitary groups, the government falsely labeling it as a New People’s Army rebel school. ALCADEV does nothing more than teach the essential education needed to survive and to uplift self-sustaining indigenous communities. In their integration with ALCADEV, Nina and Dan farmed first thing in the early mornings, learned advanced farming techniques, and learned about giving back to the community and the country—what students of this school learn daily.

“The people are strong. The people are so dedicated. They were revolutionary and still know how to have fun,” Dan shares about the KBKN mission trip as a whole. “I saw real change happening, and that’s why my take away, my work here, is part of that. And I don’t want to forget that and the stories they shared.”

Nina reflects on her overall experience: “Expo has already profound affected the way I organize. In the U.S. we talk about internationalism in an abstract way. It’s hard to visualize what land grabbing and imperialism are.”

ABNJ hopes that Nina and Dan will add new energy and fire to the organizing back in the United States as part of international struggles toward justice. From the large-scale mining operations displacing communities in Central Luzon to the counterinsurgent forces killing Lumads in Mindanao, there is a lot of work U.S. youth can do here.

Anakbayan is a youth and student organization working to educate, organize and mobilize our community to address important issues that affect Filipino in the U.S. and the Philippines. We aim to unite Filipino youth of all backgrounds in order to achieve genuine freedom and democracy in the Philippines. Check out ABNJ’s website at anakbayannj.com. If you’re interested in learning more about Kapit Bisig Kabataan Network (KBKN) and their mission trips, make sure to check out at kbkn.tumblr.com or facebook.com/kapitbisignetwork!