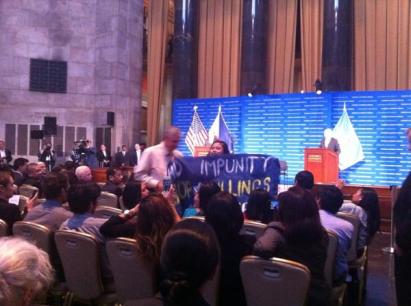 “The line of fire is a place of honor.”

In the spirit of the countless generations of progressive and militant activists that have dared to stand up to state repression in the Philippines, community organizers here in the United States chose to confront Philippine President BS Aquino during his (unwelcome) visit to both New York City and San Francisco. On September 23rd, three activists publicly criticized Aquino and his failures to the Filipino people during a forum held by Columbia University. A protest led by the organizations of which these activists are a part was held simultaneously outside the university hall. On September 24th, progressive organizations based in the Bay Area rallied outside of a Wells Fargo building that Aquino was in. Anakbayan Silicon Valley (ABSV) holds the utmost respect for the individuals and organizations that stood in the line of fire to oppose and expose the crimes of the Aquino administration, and we are honored to call these people our kasamas, our comrades.

The actions at Columbia University and the streets of San Francisco are not isolated events, nor are they the work of any one individual, as the mainstream media paints them to be. A history of oppression faced by the Filipino people has led to the the formation of organizations that represent all sectors of society, from workers to peasants, youth to educators, womyn to queer-identified, and everything in between. Those that confronted Aquino last week are members of such organizations here in the US, and they have been championing the rights and welfare of Filipinos both in the Philippines and in the US for years. ABSV has been organizing in the South Bay not only to protest the criminal negligence and state repression led by the Philippine government, but also to address the issues facing Filipino youth in our communities.

Our collective anger, and the actions that result, stem from centuries of colonial exploitation of the Filipino people, decades of rule by a Philippine state that has chosen profits over people, and generations of families torn apart by forced migration due to landlessness and joblessness in the Philippines. In the last four years of Aquino’s administration alone, we have seen this violence time and time again.

We have seen it in the failed government response to those affected by Typhoon Haiyan, both in the immediate aftermath and in the current conditions on the ground.

We have seen it in the money going into Aquino’s pockets as presidential pork barrel, money that could have been spent for the people.

We have seen it in the continued promotion of a labor export policy that treats people as remittance-generating commodities.

And we have seen it in the government’s blatant denial of national sovereignty for the Filipino people by re-opening US military bases, and by continuing to open the country to foreign industries that do not respect the human rights of the people.

Our demands for genuine change in the Philippines are rooted in this violence. We have an undeniable reason to yell. We have an undeniable reason to rise up. And we have an undeniable right to confront an individual who has played such a large part in countless crimes against the Filipino people. We cannot confine our calls for justice to a Q&A session. We will not wait in a queue. To do so would disrespect the gravity of the struggle faced by our kababayan and their clamor for a society that upholds and protects their rights. And it is the people to whom we should be showing our respect. Should President Aquino seek to be treated with respect, he must earn it first.

ABSV’s current campaign, Project FLAME (Filipinos Leading A Movement for Empowerment), seeks to provide an opportunity for youth to voice their struggles outside the confines of a classroom, as the brave activists in New York and San Francisco have done. Through a storytelling project within the campaign, we are organizing our community to speak out against the educational violence they face: lack of adequate college admissions guidance; the increasing costs of tuition, even in public schools; the student debt crisis; the inability of youth to find stable jobs to sustain themselves; and the ever increasing dropout rate of Filipino youth due to institutional obstacles. These issues are not isolated from those in the Philippines, with the US spending exponentially more on the military than on our education. This same military budget is going to increased military aid to and military presence in the Philippines, which again have led to countless human rights violations. Whether in the Philippines or in the US, Filipinos are suffering from a system that serves the interests of the minority rather than the majority.

Until the people’s demands are answered, we will continue to educate, organize, and protest, whether inside a university hall or out on the streets. We hope that more people will be emboldened by the actions of our fellow kasamas, if not to join us in protest, then at least to have conversations with us to understand why these protests are organized to begin with. The people’s struggle is not a mere shouting match, it is not a rude interruption. It is a place where the most marginalized and oppressed can speak freely. It is an honorable place to be.