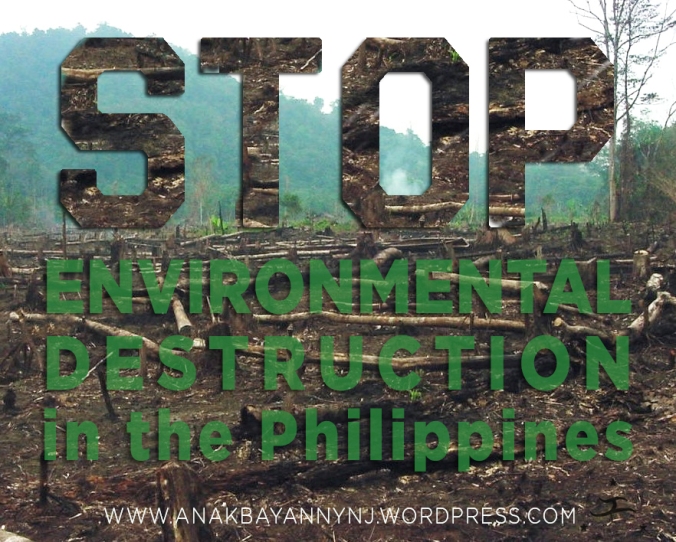 On December 16, 2pm, Typhoon Sendong (Washi) landed in the Philippine area of responsibility. Around 2am of December 17, Typhoon Sendong dropped a month’s worth of rainfall — amounting to 142 milimeters (6 inches)– over Northern Mindanao, the Southern most island in the Philippines. It caused flash floods, overflowing rivers and massive landslides.

It should also be noted that though Typhoon Sendong dropped only an average of 5-8inches of rainfall (as compared to Ondoy’s 15-18inches), the death toll under Sendong is almost 3-4 times more than Ondoy.

Lastly, we also want to call attention to the Aquino government’s culpability due to continuous budget cuts on vital government functions, its defunding of the national calamity fund, which aggravated the lack of preparedness and capability of the local governments to respond to Typhoon Sendong.

What can you do?

Petition to Stop Environmental Destruction in the Philippines

We are aiming to gather signatures. This is to register our concern regarding the deteriorating environmental condition of the Philippines that is causing harm on our people.

You can help raise awareness about this issue by conducting discussions, workshops, forums in your school, community or organization. You can contact us and we can help organize the event with you.

You can join volunteer with us for this campaign and join us on our monthly meetings, every 1st Friday of the month. Help us build a strong Filipino youth movement that will affect genuine change in our communities and in Philippines.

4) “All That Glitters” A photo story by Alex Felipe