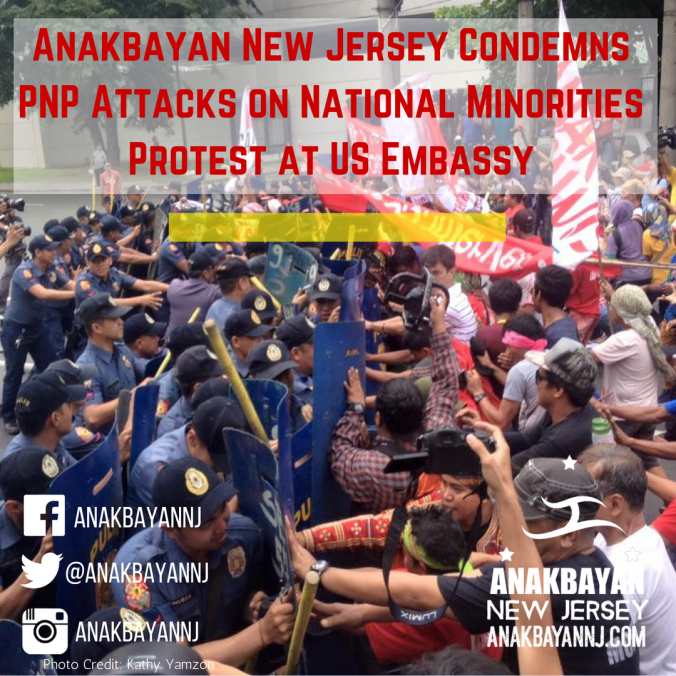 Anakbayan New Jersey strongly condemns the fascist police violent dispersal and attack of indigenous and Moro people who peacefully gathered in front of the US embassy yesterday on October 19th, 2016. SANDUGO — a new national alliance of indigenous, Moro, and national minorities for self-determination — mobilized calling for a sovereign foreign policy and end to US imperialist control of the Philippines. As the program was closing, a police van rammed through the crowd of mostly indigenous people multiple times as ordered by Col. Marcelino Pedrozo. Over 50 have been reported injured and at least 29 were illegally arrested, including media, members of the medical team, and indigenous youth. Protesters were also met with tear gas and chased and beaten by Philippine National Police (PNP) officers.

Anakbayan NJ recognizes that this is not an isolated incident. On October 18th, SANDUGO marched to Camp Aguinaldo the Armed Forces of the Philippines (AFP) headquarters, and staged a peaceful protest calling for the end of militarization in their communities. Members of the AFP blasted the indigenous groups with water cannons to forcibly disperse the rally. In addition, there are countless other violent and often deadly operations on behalf of the AFP and their paramilitary in the home communities of the same national minorities. Just last week Jimmy Saypan, secretary general of the Compostela Valley Farmer’s Association was assassinated. He fought to block the entry of Agusan Petroleum and Minerals Corporation (AgPet) and has confronted the 66th Infantry Battalion which protects AgPet’s interests. It is these same actors who target community leaders to encroach on the land that are behind his murder. Despite the ceasefire declared as part of the Peace Talks negotiations between the Government Republic of the Philippines (GRP) and National Democratic Front (NDF), the AFP has engaged in offensive operations and many farmers and indigenous people have been killed.

This state violence is in line with the AFP and PNP’s true role in serving and protecting the interests of US imperial plunder and rule that so aggressively targets and kills indigenous people to extract an abundance of natural resources from their ancestral domain. In order for this fascist violence to end the Philippines must end its subservience and control under the United States.

Anakbayan NJ also recognizes that state violence is not isolated to the Philippines, but occurs at the hands of state forces in the United States. Police and military forces continue to arrest, harass, and attack activists who have been protesting the construction of the Dakota Access Pipeline (DAPL) on Lakota ancestral domain since August 2016. The DAPL which would transport natural gas underneath the Missouri River values the growth of corporate profit while threatening the lives of Native Americans who survive off fresh water sources. Black activists and community members who defend black resistance continue to be surveilled and met with violence as police continue to kill with impunity. Yesterday, Deborah Danner, a 66 year old schizophrenic woman, was shot in her apartment in the Bronx after a neighbor called 911 reporting an emotional disturbance. As Anakbayan NJ, we will continue to support all peoples resistance against all forms of oppression. We stand firm in our belief that our liberation is deeply intertwined with the liberation of all people from imperialism.

As we continue to support the demands of SANDUGO and call for justice, we call on President Duterte to:

We assert the right to self determination and right to protest in defense of national minorities’ ancestral land and their people. End militarization and state repression! Protect ancestral lands from foreign interests! Fight for just and lasting peace in the Philippines!