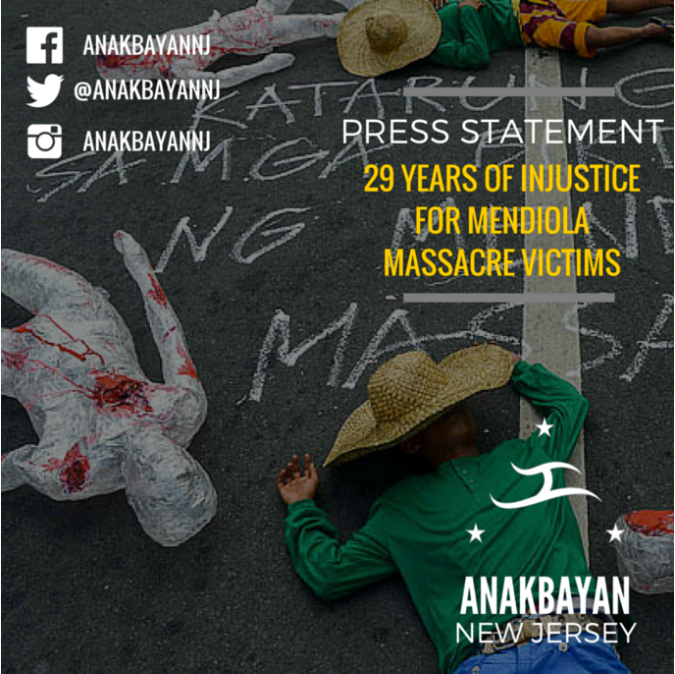 Anakbayan New Jersey commemorates the 29th anniversary of the Mendiola Massacre, the violent dispersal of peasant farmers peacefully mobilizing for rights to equal land distribution and just wages on January 22, 1987. Although it has been almost three decades since the massacre, the people continue to not only call for justice for the victims but also to demand genuine agrarian reform and national industrialization – the only remedy to the root of the issues of semi-feudalism, and bureaucrat capitalism within the countryside.

On January 22nd after six days of peaceful protest, the Mendiola Massacre erupted as a result of  Corazon Cojuanco Aquino’s promise for land reform as she came to power. Emboldened by this promise, 20,000 farmers and their allies marched to the Mendiola Bridge calling for genuine free and equal distribution of the land only to be met with severe militarization and state violence killing 13 farmers and wounding 39 others. In 1988, the same year the Manila regional Trial Court dismissed the class suit of the families of the victims and survivors against the government and involved officials, the Aquino regime created the Comprehensive Agrarian Reform Program (CARP).  But as Sonny Africa from IBON International details there has been a downward trend of land ownership before and during CARP. In 1971, the amount of farms fully owned by a family fell from 58% to 47.5% in 2002. Furthermore land area of these family farms has decreased from 62.9%  to 50.6% in the same period.

CARP is a way to entrench bureaucrat capitalism within the land and maintain the semi-feudal conditions that support it. It is riddled with loopholes and defects that detract from a genuine land reform plan such as the Stock Distribution option and the land conversion option. These two methods have been used to great effect in the Hacienda Luisita, a sugarcane plantation owned by the Cojuanco family. There, the Tarlac development corporation, the corporation that controls the Hacienda, instead of giving farmers land, distributed stock to more than 6,000 sugar farm workers. The shares were distributed on the basis of the number of working days however, since farm workers are only guaranteed 80 days a year.  In addition land conversion, the act of changing agricultural land to commercial or industrial is also a means of exempting land owners.  In parts of the Hacienda Luisita the land has been converted into the Luisita Golf and Country Club and the Luisita Industrial Park (500 hectares).

The government’s opposition to genuine land reform in Hacienda Luisita is the norm. However, the farmers from San Jose Del Monte City, Bulacan, have recently launched a series of protest actions in commemoration of the Mendiola Massacre. These protest actions and dialogues are against the land grabbing of their farms by the Central Bank of the Philippines and demanding the closure of a sanitary landfill and a rubber melting company that are not only severely destroying the environment, but also causing health issues to the farmers. According to Eriberto Pena, leader of Alyansa ng Magbubukid sa Bulacan (AMB), a local chapter of peasant group Kilusang Magbubukid ng Pilipinas (KMP), “The same issues raised by thousands of farmers who joined the January 1987 week-long protest at the then Ministry of Agrarian Reform (now Department of Agrarian Reform) and Mendiola are the same issues faced by farmers of San Jose Del Monte City. Then and now, there is no genuine land reform and farmers remain victims of perennial land grabbing.”

Due to these conditions, Filipino youth and students must stand with the farmers against land grabbing and exploitation. “They are constantly being harassed not only by private armies of the Araneta family, but also members of the Philippine military and Philippine National Police. The farmers have linked the harassment to the planned MRT-7 rail system that stretches from Quezon City, Caloocan, and San Jose Del Monte,” said Ruthie Arroyo, Anakbayan New Jersey Chairperson. Arroyo was able to integrate with farmers of San Jose Del Monte City in December 2015. “The peasant resistance is strong, and we as youth in the US must make it our goal to know what a majority of the Philippine population has been going through even before the Mendiola Massacre, and help strengthen and further advance the peasant movement,” she adds.  As progressive youth and students, we support the peasant resistance and their call to put an end to landlord monopoly of lands, and to advocate for a genuine land reform program. We support all efforts to pass House Bill 252 or Genuine Agrarian Reform Bill (GARB) co-authored by Anakpawis Party-list and Rep. Neri Colmenares in Congress, and all actions of the Kilusang Magbubukid ng Pilipinas (KMP) and other affiliated organizations.  We stand firmly with farmers alliances who are resisting the vicious subjugation of their land by the ruling class.

To this day, survivors of the Mendiola Massacre and the ever expanding ranks of the toiling masses have relentlessly protested land grabbing and sham agrarian reforms. Across the Philippines, peasant farmers to farm workers to indigenous peoples are rising for the right to the land that they labor on. Anakbayan New Jersey calls on all youth and students to support the peasant movement in the Philippines and join the farmers in their struggle as we remember the Mendiola Massacre.

JUSTICE FOR THE VICTIMS OF THE MENDIOLA MASSACRE!
GENUINE AGRARIAN REFORM NOW!
###

One thought on “29 Years of Injustice for Mendiola Massacre Victims”