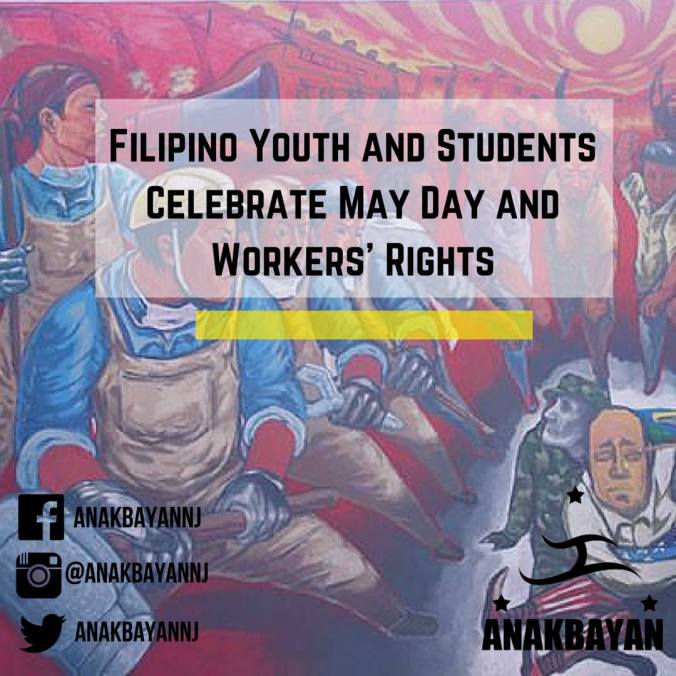 Filipino Youth and Students Celebrate May Day and Workers’ Rights

Anakbayan New Jersey celebrates the hard-fought victories of the working class on the 130th anniversary of International Workers’ Day alongside the workers of the New York/New Jersey area. Also known as May Day, this day commemorates the struggle of workers and their victories for workers’ rights. 2016 is especially momentous as the 10th anniversary of the May Day coalition that has gathered immigrant and workers organizations every May 1st for the past decade.

International Workers Day has its roots in the fight for an eight hour work day and the right to organize during the early 19th century in the U.S. An average worker’s workday would typically go for 12-14 hours—upwards of 18-20 for some—and would take place in very unsafe and unjust conditions. Workers began to organize and form unions to protest against their capitalist employers for an eight hour work day without a decrease in pay; these demonstrations were then met with violence by police and armed agents hired by factory owners. Eventually, these protests resulted in the legal establishment for an eight-hour work day, and May Day became an internationally recognized holiday celebrating workers around the world and a day to organize and mobilize for worker struggles.

May Day is also observed as a public holiday in the Philippines and shares a revolutionary history, with the first rally initiated by the Union Obrera Democratica in 1903 for workers’ economic rights and Philippine independence from the US Filipinos continue to assemble on May 1st for workers and migrants rights, fair wages, and workplace safety among other struggles to this day. On May 1, 2015, more than 100 Filipino migrant workers in Hong Kong marched to stop fees imposed by the Philippine government for departing the country to work abroad. These migrants claimed that they had to pay upwards of P25,865 to the Philippine government before even leaving for Hong Kong, taking away from their already meager earnings and savings.

In 2005, Filipinos in BAYAN-USA played an important role in rekindling workers’ fire to fight for May Day in New Jersey and New York. BAYAN-USA was and continues to be an alliance of progressive Filipino organizations of students, scholars, women, youth, and most importantly workers. BAYAN-USA worked alongside the Million Worker March, Troops Out Now Coalition, Teamsters Local 808, TWU Local 100, and other groups to reignite May Day in Union Square.

On this May Day, Anakbayan New Jersey not only celebrates the working class struggle but also recognizes imperialism’s intensifying attacks on workers all over the world. Because it is capitalism that extends beyond national borders in order to hang on to its life, imperialism must feed off of the exploitation of workers not only within the United States but also to Third World countries in the Global South, such as the Philippines.

In the example of workers in the Philippines, U.S. imperialism drowns the domestic markets with finished products—from clothing to cars—that the Philippines cannot create national industries that Filipino people own. Even though there are factories that Filipinos sweat and bleed to work in, these factories are owned by imperialists such as the United States and China. Because there is no national industry, the Philippines is rampant with unemployment, underemployment, and unlivable wages. As a consequence, the Philippine government actively exports its people to temporary jobs overseas as Overseas Filipino Workers (OFWs)—Filipinos are forced to migrate by their own government.

Take the case of Mary Jane Veloso: she is an OFW who was sentenced to death row for smuggling drugs into Indonesia because her recruiters packed heroin in her luggage without her knowledge. While Veloso’s execution has been halted due to organized international pressure on the Indonesian government, she remains imprisoned in Indonesia a year since her reprieve, and the case against her drug traffickers is ongoing.

While Anakbayan New Jersey commends the successes of workers on this May Day, we also condemn the heightening and literal war on the working class. Under the recent Enhanced Defense Cooperation Agreement (EDCA), there will be more US military presence on Philippine soil, which time and again comes with increasing human rights violations against the Filipino people. Both Philippine and US military seek only to protect the properties and interests of Filipino big landlords and foreign imperialists, rather than to pay workers living wages, provide safe working conditions, allow workers to unionize, and protect other workers’ rights. Workers’ rights are also human rights.

One way Anakbayan New Jersey commits to workers’ rights is by supporting Philippine senatorial candidate Neri Colmenares of Migrante Partylist. As a #FighterNgBayan, Colmenares has long been uplifting workers by, for example, authoring HR02042 to open up the case of Mary Jane Veloso and HB253 to increase the salaries of employees and workers to P125 daily across the boar

“May Day is a reminder for us that we cannot be content and remain comfortable with only organizing in our sector. We have seen that the people united have the power to enact change in collective action.” states Ruthie Arroyo,  Anakbayan New Jersey chairperson. “Only then can we really take down capitalism at its roots.” Arroyo also adds that we must seek guidance from the working class in order to continue a comprehensive people’s movement.

From New Jersey to the Philippines, the working class struggle must be connected across the globe and be stronger and more militant than ever. Because the workers are the most directly exploited by imperialists, we as youth and students resolutely follow workers’ leadership in the ongoing international proletarian movement to end imperialism.

WORKERS OF THE WORLD UNITE! WE HAVE NOTHING TO LOSE BUT OUR CHAINS!
LEGALIZATION FOR ALL!
LIBERATION, NOT DEPORTATION!
END US IMPERIALISM!
###