On March 8th, 2016, Anakbayan New Jersey observes International Working Women’s Day. Its roots go back to 1909 when the Socialist Party of America organized a march in Manhattan to observe a women’s garment strike that had taken place earlier. This particular strike called for better wages and working conditions and the right to vote. More than a century later, this day is especially important for us as young Filipino women in the U.S. advocating for the rights and welfare of Filipino women at home and abroad.

Today, we connect International Working Women’s Day to the conditions of female OFWs (Overseas Filipino Workers) — especially that of Flor Contemplacion and Mary Jane Veloso — and the conditions that lead to the death of Jennifer Laude. Of the estimated 2.3 million OFWs who worked abroad from April 2013 to September 2013, 49.7% of those were women. 53.8%  of the 49.7% belong to the 25-34 age bracket. As recent as 2007, Migrante International, a migrant rights group, has been handling more than 1,000 cases of abuse against OFWs, according to 2007 statistics. Migrante’s Rights and Welfare Assistance Program has handled at least 50 cases of violence against women (VAW) from January 2015 to February 2015.

We as Anakbayan New Jersey recognize that the semi-feudal and semi-colonial conditions of Philippine society force so many young women to migrate in order to barely survive. As a result, these women are placed in unjust working conditions, often leading to domestic violence and abuse. Wages are often low and what is left from agency fees and remittances to family is barely livable; sometimes wages are withheld, as in the case of Terril Atienza, an OFW that died in Mongolia under the hands of her employers.

Sometimes, OFWs are promised work and livable wages by recruiters; they are then duped once they leave the Philippines. This was the case of the over 300 teachers that were trafficked to Washington, D.C. by Isidro Rodriguez. These teachers did not get the teaching jobs, housing, and $27-$30 per hour wages they were promised. Rather, they were placed in substandard housing, with up to 12 women sharing a room. Some were placed in day cares. All experienced overwork, low wages, and discrimination.

A similar case is that of the Florida 15, a group of Filipino workers victimized by their employer, Jose Villanueva. Villanueva owns San Villa Ship Management Co., a recruitment and employment company. One of the Florida 15, Patricia Ballesteros, came to work at the W Hotel in Miami in 2009. However, she and most of the Florida 15 were forced to pay up to $300,000 in placement and training fees in order to get to Florida. They were paid $6 an hour as opposed to the promised $16-$17 per hour — and overtime pay was not included in their salaries. Not only that, but the Florida 15’s paychecks would be given to them especially late. San Villa Ship Management Co. also failed to renew their H2-B visas and notify the Florida 15 about this.

Despite the Florida 15 consistently following up on their statuses, some of them were arrested by the Immigration and and Customs Enforcement (ICE). Thankfully, on February 15th, 2013, the Florida 15 had gotten their T-Visas approved and employment authorization cards issued through the help of Atty. Felix Vinulan and the Stop Trafficking our People (STOP) Taskforce led by the National Alliance for Filipino Concerns (NAFCON).Unfortunately, these stories are not uncommon; OFWs experience some variant of these stories as they leave the Philippines to support themselves and their families.

Flor Contemplacion and Mary Jane Veloso
Flor Contemplacion’s story is especially fitting as we observe IWWD. An OFW in Singapore, she was hung on March 17th, 1995 after being wrongly accused and convicted of killing Delia Maga, a fellow Filipino domestic worker, and Nicholas Huang, the son of Maga’s employer. Contemplacion confessed to the murders but later admitted that she spouted them after being coerced.

Elements of Contemplacion’s story can also be seen in Mary Jane Veloso’s case. Also an OFW, Veloso was victimized by her recruiters. Before working in Indonesia, she had been working in Dubai as a domestic worker before fleeing after an attempted rape. Now, Veloso is on death row because of drug smuggling charges. After leaving her children’s father, she was forced to be the sole breadwinner. Veloso first went to Malaysia after promises of job availability; she was then told that the only work available for her was in Indonesia. Her parents say that while Veloso was in Indonesia, 2.6 kg of heroin was sewn into her suitcase unknowingly. She was then arrested at Yogyakarta airport for drug smuggling charges. She is now on death row in Indonesia. Knowing that Veloso was unjustly accused of drug smuggling and connecting it to Contemplacion’s case and the conditions that lead to their victimizations, we continue to fight and advocate for the rights and welfare of OFWs — especially female OFWs — on International Working Women’s Day.

Jennifer Laude
On October 11th, 2014, the life of Jennifer Laude was taken away by US Marine Pfc. Joseph Scott Pemberton at Celzone Lodge in Barangay East Tapinac. Pemberton said that he killed Laude, a trans woman, out of self-defense. Instead of a murder conviction, Pemberton got a slap on the wrist with a homicide conviction. We as member of Anakbayan New Jersey’s Women’s Committee are outraged at trans panic defenses because this wrongly blames trans women for their own deaths. We also connect this to US imperialism and the part that the Visiting Forces Agreement (VFA) and the Enhanced Defence Cooperation Agreement (EDCA) played in the death of Jennifer Laude. The presence of bases in Subic Bay and other areas of the Philippines has created red-light districts for the amusement of American troops — and rendered Filipinas as their toys while they struggle to make ends meet. Anakbayan New Jersey is also critical of the Philippine judicial system — the same system that gave Pemberton a homicide conviction of between 6-12 years in prison and  mandated that he give $95,350 to Laude’s family. This is the same judicial system that unjustly and ferociously imprisons political prisoners and other innocent people that are fighting for the people and the sovereignty of the Philippines when the Philippine government cannot and will not support its own people. Rather, the Philippine judicial system reflects a skewed priority where the American is more valuable and treasured than the Filipino.

GABRIELA-USA 3rd Congress
Anakbayan New Jersey recognizes that certain conditions have led to the cases of Flor Contemplacion; Mary Jane Veloso; Jennifer Laude; and countless other women who are just trying to survive a capitalist world. We recognize that our part to smash feudalism, imperialism, and bureaucrat capitalism is through our organizing work, especially through campaigning and advocacy for migrants’ and workers’ rights and against violence against women. It is in this vein that GABRIELA-USA’s 3rd Congress is being called — and why Anakbayan New Jersey is sending observers from its Women’s Committee. GABRIELA-USA’s 3rd Congress will be held in San Francisco, CA on March 19th-20th. A member organization of the International Women’s Alliance, GABRIELA is a grassroots-based alliance of more than 200 seeking organizations, institutions, desks, and programs of women all over the Philippines to wage a struggle for the liberation of all oppressed Filipino women and the rest of our people. GABRIELA-USA actively campaigns for women’s rights, gender discrimination, violence against women, women’s health, and other women-centric issues. We are sending observers to see the steps, campaigns, and best practices taking place at GABRIELA-USA’s 3rd Congress and in their organizing work in order to synthesize, localize, and implement them here in New Jersey. From there, we will only get closer to dismantling the semi-feudal and semi-colonial society that plagues the Filipino people at home and abroad.

We as Anakbayan New Jersey celebrate and recognize International Working Women’s Day through the framework of the Filipino people’s struggle for National Democracy. We link the conditions that lead Filipinas and other OFWs to migrate and the conditions that lead Filipinas to sell their bodies in all aspects to the conditions that the National Democratic movement seeks to combat. One of the ways we seek to combat these conditions is through electing representatives for Migrante Partylist, a sectoral partylist of overseas Filipinos, in the House of Representatives. Migrante Partylist seeks to rebuild the Philippines through a better government whose main priority is to support and serve the Filipino people. Here are some action steps you can take:

Take a stand for the Filipino people and vote and mobilize voters to support Migrante Partylist in the May 9th elections! 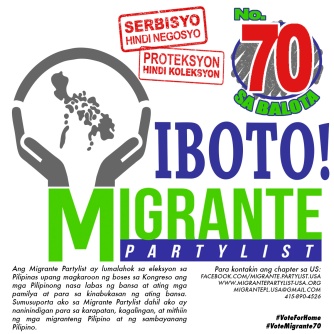 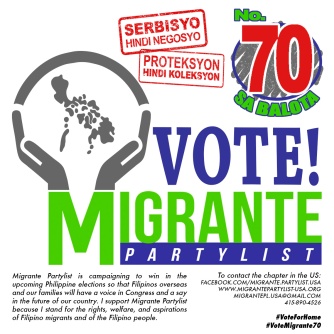