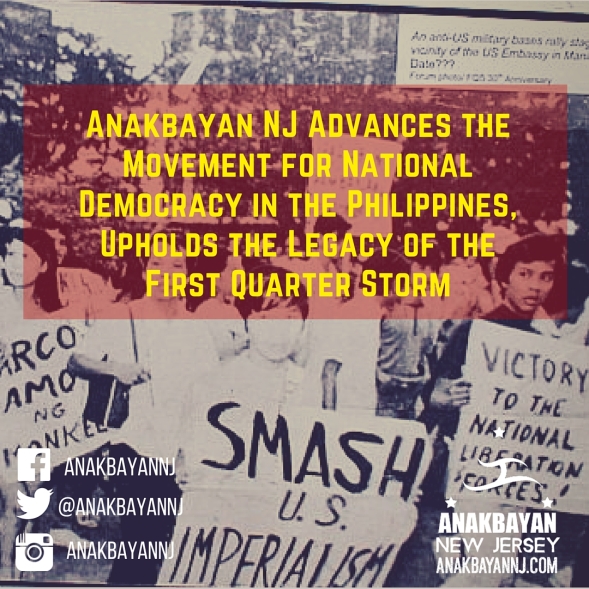 Anakbayan NJ Advances the Movement for National Democracy in the Philippines, Upholds the Legacy of the First Quarter Storm

Anakbayan New Jersey celebrates the 46th anniversary of the First Quarter Storm (FQS) alongside our work to continue that revolutionary tradition in fighting for national democracy in the Philippines! From January to March 1970, a protracted series of demonstrations against the oppressive U.S.-Marcos Dictatorship in the Philippines reached a breaking point, with about 100,000 Filipinos storming Malacañang palace as well as the U.S. embassy. While the FQS was foundational to the 1986 People Power movement that ousted Marcos and his cronies out of the country, Anakbayan NJ recognizes the ongoing—and worsening—corruption and tyranny since Marcos, and we are committed to advancing the struggle for national liberation and democracy in the Philippines.

The FQS was a period when youth and students practiced comprehensive work, aligning themselves with workers, peasants, women, church people, and even those who were at first neutral about the dictatorship. This movement demonstrated that students must move out of the classrooms and link up with the basic masses, and we in Anakbayan NJ are working toward strengthening this correct practice in our organizing.

The Marcos regime was well-known for its authoritarian character and irresponsible, corrupt spending of resources. Although Marcos was eventually ousted from the pressures of the FQS through the People Power Revolution of 1986, the Philippine government has been continuously controlled by U.S. foreign interest and the puppet landlords who own the Islands. After the Marcos was ousted, the also U.S.-backed Corazon Aquino administration was directly involved in the Mendiola massacre. Farmers who were holding a peaceful demonstration were met with police brutality, tear gas, and gunfire, leaving 13 of the protesters dead.

Even now, the Philippines is run principally by a corrupt, neoliberal administration, with Benigno Aquino III as the outgoing head of the state. Further violating our national sovereignty, the Philippine Supreme Court recently upheld the Enhanced Defence Cooperation Agreement (EDCA), an anti-people and anti-democratic policy that allows the United States to station military troops, weapons and war materials in bases throughout the country.

Anakbayan NJ advances the legacies of the youth organization Kabataang Makabayan and the women’s organization Malayang Kilusan ng Bagong Kababaihan (MAKIBAKA), two pro-people organizations founded to fight for national liberation during the Marcos puppet regime. For example, we sustain these legacies when we launched our Women’s Committee on our 10th anniversary, formed to empower our fellow Filipino women to take up the revolutionary tradition of the Filipino people and fight for national liberation and genuine peace in the Philippines.

We call upon Filipinos and non-Filipinos alike to honor and engage in our revolutionary history by joining organizations like Anakbayan NJ fighting for genuine national democracy and standing in solidarity with us during Philippine Solidarity Week. We celebrate Philippine Solidarity Week this year from February 4 to 11 to commemorate the Philippine-American War and to raise awareness and support for the continuing struggle of the Filipino people for national liberation. We ask our solidarity allies to

Also join us in pushing forward the Save Our Schools and Education Is a Human Right campaigns. It is at this critical point that we call upon the Filipino community to rise up and stand against the rampant corruption that our parents and their generation fought for almost 50 years ago!