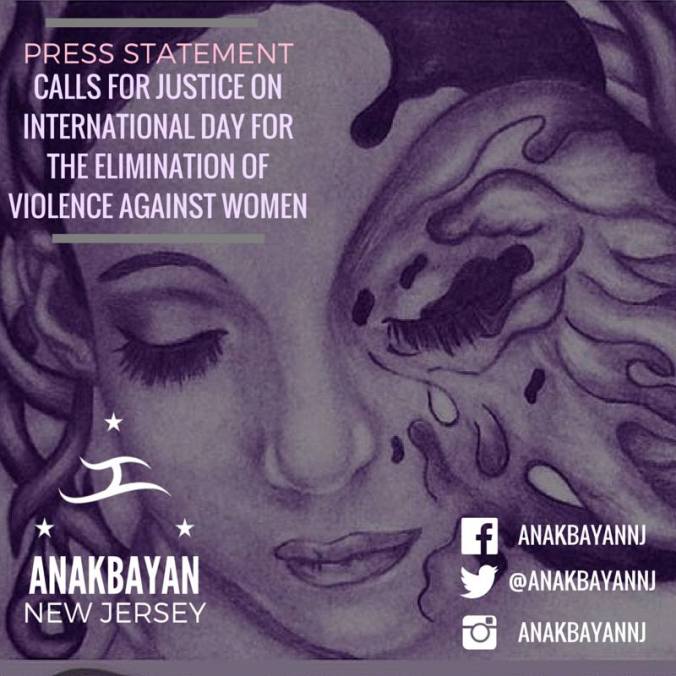 The United Nations General Assembly designated November 25th as International Day for the Elimination of Violence Against Women (IDEVAW) in commemoration of the 1960 assassination of the three Mirabal sisters, who were political activists in the Dominican Republic. The date also marks the start of the “16 Days of Activism” that precedes Human Rights Day on December 10th each year.

Today, on IDEVAW, we join our allies at Action 21, the Jersey City community, and the world at large to stand united for a just society for women, and for all oppressed peoples.

We, Filipino youth from Anakbayan New Jersey, mark this important day by highlighting the conditions that force about 6 million Filipinos to leave the country each day, most of whom are women, in search of economic security abroad. Filipina immigrants often face violence in the countries where they find work. Host governments often turn a blind eye while the Philippine government pursues its Labor Export Policy to maximize profit off of migrant workers’ remittances. These women often cite physical and psychological abuse, discrimination, sexual assault, and other forms of abuse and exploitation such as wage theft, limited access to food and shelter, and not allowed time off from work.

As of 2010, Jersey City’s total population is 7% Filipinos, putting the city at a total of over 18,000 Filipinos, and rising – the second highest number in the state. The Filipino community in Jersey City is comprised heavily of working class and migrant women who face multiple intersecting layers of oppression including, but certainly not limited lack of equal access to employment and living wages, workers rights, immigration and citizenship barriers, and gender-based violence at home and in the workplace. For these reasons, IDEVAW is relevant to the lives of Filipina migrant women who work tirelessly to survive in the name of providing for the needs of their families back home.

According to the U.S. Department of Justice, a woman is beaten every fifteen seconds. Jersey City in particular has faced increased violence as just last Thursday, November 19th, a woman faced an attempted attack by an ex-boyfriend with an ax, injuring two people at Newport Mall. As of November 21st, the crisis has escalated to five fatal shootings in twelve days. We are raising alarm for these regrettable developments in our neighborhoods.

Further, Jersey City women face multiple forms of violence through socioeconomic disenfranchisement, lack of access to jobs and education, and targeting of migrant workers. As a result of a lack of a living wage, increased student debt, and lack of social services, women in Jersey City experience violence in both explicit and insidious ways.

Violence against women does not solely connote the physicalities of abuse, but rather, accounts for all forms of violence, physical, psychological, and even political and economic. Violence occurs and is sustained through the injustices inherited and perpetuated by systems of patriarchy, upheld by imperialism, feudalism, and bureaucrat capitalism. Violence against women is deep set, but can be uprooted.

Since the founding of Anakbayan New York/New Jersey in 2005, and the formal inception of Anakbayan NJ in 2012, Filipino women have played an integral role in serving the most oppressed people and pushing forward the national democratic movement with a socialist perspective. We must continue to strive in upholding the rights of poor and working class women here and across the globe.

With the launch of the Anakbayan New Jersey Women’s Committee, we renew our commitment to studying the concrete experiences of Filipina immigrants for the purpose of uplifting their stories, and actively participating in mass campaigns that respond to their immediate needs and concerns, while exposing the manifestations of an imperialist system that perpetuates hardship and exploitation.

We call on Filipino youth in the U.S. to join Anakbayan in educating, organizing, and mobilizing our community to fight for fair working conditions, support for victims of domestic violence, an end to human trafficking, the removal of US military bases and personnel in the Philippines and other developing countries. Let us advance the legacy of the Mirabal sisters and our own, Lorena Barros, who wholeheartedly took up the cause of national liberation and genuinely serving the people.

Justice for Jennifer Laude! US out of the Philippines!