Activists urge the community to defend immigrant workers’ rights in the face of modern-day slavery
New York, NY– Progressive Filipino youth group, Anakbayan, participated in a series of events in New York City to demand justice for the Grand Isle Shipyard (GIS) workers. A group of over 70 Filipino workers have filed a class action lawsuit against Grand Isle Shipyard, Inc. for labor abuse and exploitation, unlawful deductions, isolation and violation of civil liberties, human trafficking, racism, discrimination and modern day slavery.
Since 2008, an estimated 500 Filipinos have worked for GIS, deemed one of the most dangerous oil platforms in the Gulf of Mexico. Its serious safety code violations need to be addressed immediately, according to the Bureau of Safety and Environmental Enforcement.
The Justice for GIS Filipino Workers Campaign (J4GIS-Fil-Workers), led by Philippine Forum, was launched on January 16 with a press conference composed of community leaders, Filipino civil rights attorney, Ellaine Carr, two former GIS workers, and the wife and children of Avelino Tajonera, one of the three Filipino workers killed in the oil platform explosion on November 16, 2012.

The New York and New Jersey chapters of Anakbayan are collaborating with various immigrant and worker groups in the area to raise awareness about labor trafficking and modern day slavery.

“Philippine Ambassador Cuisia claims he has been aware of the unsafe working conditions at GIS since 2010; yet 3 of our kababayans are dead, hundreds exploited. The Philippine government, through the Labor Export Program, supplies the world’s industries with millions of Filipino workers. Workers whose rights and welfare the government fails to protect,” said Matthew Cheirs II, Chairperson of Anakbayan New York.

The Louisiana contingent’s visit concluded with a Community Reception and Candlelight Vigil on the evening of January 19 at the Bayanihan Community Center in Queens, NY.

Dozens of supporters came out to hear the workers’ testimonies about the harsh conditions they experienced while working at GIS. The Tajonera family shared stories of courage and grief over the death of Avelino Tajonera, who risked his life to provide for his wife and young children.

Trafficking survivors, including the “Florida 15”, shared words of encouragement with the GIS workers. Community members and grassroots organizations also commended the workers’ determination and expressed their support for the campaign.

Alice Feng, Educational Officer of the Revolutionary Students Coordinating Committee, said in solidarity, “As students, we have the task of bringing their [the workers’] struggles to light in the broadest way possible. Our struggles on campus are connected to our struggles in our communities and our homelands.”

Take a Stand Against Slavery

The workers’ week- long visit to New York City is only the beginning. Anakbayan is urging Filipino- American youth in New York and New Jersey to stand up for immigrant rights and actively participate in the J4GIS-Fil-Workers campaign.

“Filipino laborers escaping slavery under Spanish colonial rule at the time of the Manila- Acapulco trade were the first Filipino settlers in the United States. They found sanctuary in Louisiana in the late 18th century. Today, workers imported from the Philippines, are enduring similar conditions that Filipino pioneers in the US fled from centuries ago,” shared Bea Sabino, Chairperson of Anakbayan New Jersey.

“Slavery should not have a place in the 21st century,” continued Sabino. “We call on our fellow Filipino youth to take a stand against exploitation and racism. Help us spread the word by organizing public forums and signing up for the Fact Finding Mission to Louisiana on February 20-24, 2013.” 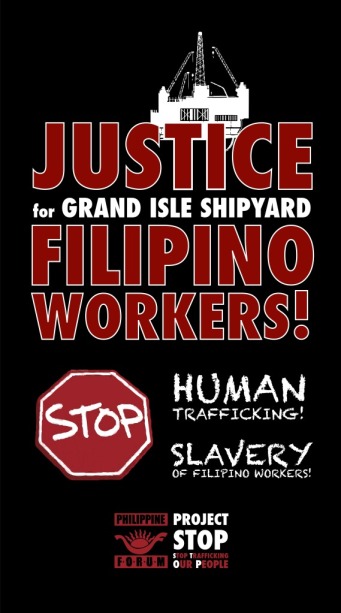