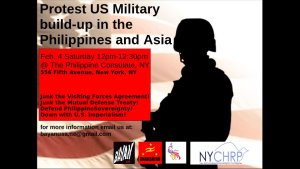 Aquino Aligns with US Military Build-Up in Asia-Pacific, a Threat to Peace in the Region

Filipino-Americans across the US, under the banner of BAYAN USA, express condemnation and disgust over the efforts of Philippine President Benigno Simeon “Noy-Noy” Aquino III to accommodate the “new” US defense strategy that entails a so-called “rebalance to Asia”, including an increase in US military presence in the Philippines. BAYAN USA also denounces the US government’s Cold War-style media offensive against economic rival China as a pretext to justify its gross expansion of US military powers in the Asia-Pacific in order to increase US economic, political, and military investments in the region.

Under neoliberalism, the US economy is largely dependent on the Pacific Rim, particularly because of its export position. In 2010, the 21 economies that make up the Asia-Pacific Economic Cooperation (APEC) forum accounted for 61% of US exports ($775 billion) and 37% of private services exports ($205 billion). The US economy’s export position in the region accounts for nearly 5 million US jobs. But for countries such as the Philippines, the US investment and export position is at the heart of deepening crisis and poverty due to lack of sovereign claim to natural resources and territory. In line with their national interests, countries like the Philippines must wage fierce struggles against US interventionism in order to assert their right to chart their own economic and political paths.

With China’s economic growth threatening US dominion over the region, and with Obama’s push for a Trans-Pacific Partnership (TPP) agreement that would outline a US-dominated free trade zone in the region, the US government has announced it will shift its military focus away from Iraq and Afghanistan and renew its commitment to assert it’s position in Asia-Pacific. It has found a reliable stooge in the Aquino government. Recent negotiations framed as a Strategic Dialogue between top Washington security and defense officials and the Aquino administration have laid the ground work for the consolidation of the Philippines as a key US military base location, serving as a permanent staging ground for US military offensives, storage space for surveillance drones, resupply and refueling station for US warships and aircrafts, as well as rest and recreational facility for US servicemen.

In addition to violating Philippine national sovereignty, Aquino’s compliance in accommodating US saber-rattling seeks to undo the 1991 landmark decision of the Philippine Senate to reject the US bases treaty that essentially shutdown permanent US military bases Subic Naval and Clark Air Field, by once again opening these ports for indefinite and “rotational” basing of US troops and throughout the archipelago.

Aquino Positions the Philippines in the Crossfire

Not only does Aquino government reach an all-time high in the barometer of US puppetry with these negotiations, it is aligning the Philippines with a military scheme that will threaten peace in the entire Asia-Pacific region. The US government, driven by its war-dependent economy, is expanding its military presence in Asia-Pacific region under rhetoric of security in the South China Sea and in particular the territorial dispute over the Spratly Islands, when in fact it seeks an excuse to provoke military aggression and create a war-like situation against China that will boost up it military-industrial complex at the expense of the surrounding countries. Such compliance on the Aquino government’s part will surely position the Filipino people in the middle of the crossfire.

Starting with the Philippine-American War of 1899, which marked the advent of US imperialism onto the global stage at the turn of the 20th century, 113 years US geopolitical strategy in region has left the Philippines with a tragic history and ongoing reality of US military infestation whose social costs have burdened its people with untold pain and misery. From hosting the largest US permanent foreign military bases to succumbing to the onerous US-RP Mutual Defense Treaty (MDT)– the mother of all unequal military treaties and agreements– to the virtually permanent Visiting Forces Agreement (VFA), over one century of US military presence in the country has been directly linked to the indiscriminate killings, rape and other sexual offenses, massive displacement of rural communities, waste, disease, and other forms of human rights abuses.

As Filipinos in the US, BAYAN USA sees concretely how both the Aquino and Obama governments– guardians of financial oligarchy– are acting in betrayal of the broad interest of the Filipino and American peoples. Just as the poor grow poorer in the Philippines under Aquino’s failed economic policies, so are working people in the US forced to carry the heavy burden of paying for a debt crisis they did not create. As peoples resistance to the intolerable 1% escalates amidst the crisis, BAYAN USA joins the call for greater solidarity between people in the US struggling against the US military-industrial complex and for economic equality and the Filipino people’s ongoing struggle for genuine national independence and democracy. This must translate to greater efforts to expose and oppose the US geopolitical strategy in the Asia-Pacific region as a scheme of the purveyors of crisis and war to maintain tight control over the region’s wealth. Peoples resistance and firm solidarity are key in our efforts to frustrate US interventionism in the region!

US OUT OF THE PHILIPPINES!

US OUT OF ASIA!