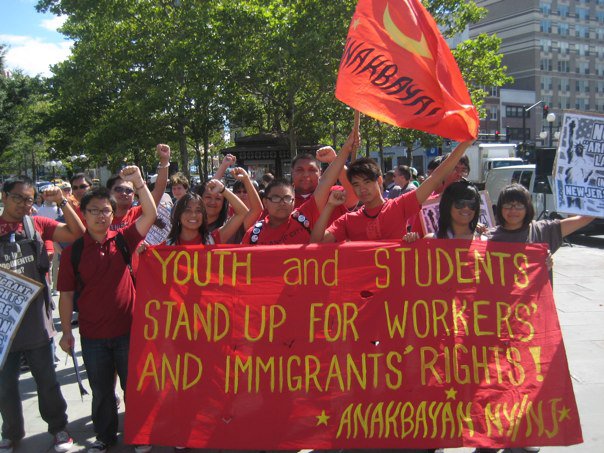 Anakbayan New York/ New Jersey stands with migrant workers and their families in exposing Immigration and Customs Enforcement’s (ICE) “Secure Communities Program” as another anti-immigrant scheme to round-up and deport migrant communities in the United States.  We are joining Action 21, Jersey City Peace Movement, Jersey City Truth, Action and Peace Coalition (JC-TAP), Truth-Media.Info, Jersey City Soccer, and Dominico- Americano 809 Association on Saturday, September 3, 2011, to call for an end to “Secure Communities”, and demand “Legalization for All” as the immediate solution to the issue of immigration. We strongly urge the Filipino community in Jersey City and other neighboring areas to support our undocumented kababayans all over the U.S. who are targets of anti-immigrant policies such as “Secure Communities”.

Roughly ten percent of  the population, or 12 million Filipinos, are living and working overseas due to dire economic circumstances in the Philippines.  Landlessness, joblessness, low wages, contractual employment and exploitative working conditions push 4,500 Filipinos to migrate every day in search of better opportunities abroad.  They become the nation’s largest commodity thanks to the Labor Export Policy (LEP), which has been in place since Marcos’ dictatorship in the mid-1970s. 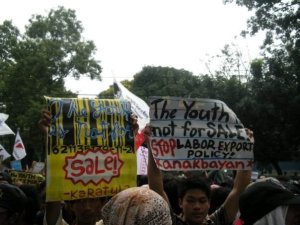 Youth Protest the L.E.P. in the Philippines

LEP was initiated as strategy to assist in paying off foreign debt and managing an intensifying financial crisis through the influx of dollars from Overseas Filipino Workers (OFWs), propping up the local economy. In 2010 alone, OFWs sent a record $18.76 billion in remittances, accounting for a 10% growth in the Philippines’ Gross Domestic Product (GDP).  The coercive LEP continues as the Philippine government’s alternative development program to industrialization.

We must grasp the abnormality of this situation.  Massive out-migration from the Philippines and other developing countries to the so-called “First World” countries such as the U.S. disproves the theory that leaving one’s homeland is voluntary.  This phenomenon is testament to a deeper problem in our society that can be linked to the global context of Imperialism.

Migration is a laborious process necessitated by a country’s failure to provide for its citizens because of Imperialism.  In simple terms, imperialism is a stronger state’s political, economic and cultural dominion over a weaker one in order to acquire cheap raw materials and cheap labor, and  use as dumping ground for surplus products and capital.  Such has been the relationship between the U.S. and the Philippines (and other semi-colonies) since the end of Spanish colonial rule.  The following neo-liberal policies are consistently imposed by the U.S. and its puppet regimes to maintain control over a country’s resources:

1. Trade Liberalization is the elimination of trade barriers, such as tariffs and other taxes in the spirit of free trade. This swamps the market of under developed countries with cheap surplus products from first world countries, such as the U.S.

2. Economic Deregulation is a policy that puts a “hands-off” policy on the market, meaning the government cannot control the prices of basic commodities nor subsidize vital ones, such as agriculture.

These policies devastate the  capacity of nations to industrialize and provide jobs, therefore, creating the socio-economic conditions that convince people to leave their homeland.  This is why Anakbayan NY/NJ believes that, without the U.S. intervening in political, economic, and cultural affairs of developing countries such as the Philippines, these nations will be able to assert their self- determination and implement genuine agrarian reform and national industrialization, ultimately eliminating the need for its citizens to undergo forced migration.

The U.S. remains to be the primary destination for many immigrants.  There are about 12 million undocumented immigrants currently residing in the U.S. due to the flawed economic system that governs immigration protocol. Among the 4 million Filipinos here, 1 million are undocumented.

In an effort to facilitate the removal of “criminal aliens”, ICE initiated the “Secure Communities Program” in 2008.  It involves biometric information- sharing between local law enforcement agencies and the Department of Homeland Security (DHS) to identify, detain and deport criminal offenders of varying levels.  Level 1 refers to “aggravated felony” and supposedly receives highest priority; Level 2 includes misdemeanor charges; and Level 3 includes crimes punishable by less than a year.

Jurisdiction of “Secure Communities” in the U.S.

“Secure Communities” has been implemented in a total of 1,508 jurisdictions spread out across 43 states including California, Florida and New York. Despite its guise of public safety, it has been found that, of the 49, 638 removals from October 2009 to September 2010, only 23% were Level 1 crimes, 49% were Level 2 and 3 offenders, and 28% do not even hold criminal records. Arrests also lead to prolonged detention, lack of detainee appeal system, and detention solely based on immigration status.

ICE does not maintain documentation of particulars regarding the offender’s case, so there is also no way of confirming one’s conviction.  Moreover, this program harbors fear among immigrant communities.  It raises the mentality that cooperating with law enforcement may be harmful to their safety in this country, especially if they are undocumented.

ICE is barking up the wrong tree with “Secure Communities”.  It is a waste of taxpayers’ money on unreliable strategies, and the expensive process of detention and deportation.  Instead of posing immigrants as threats to national security, why not enable them to be productive members of society through a realistic legalization process?

“Legalization For All” Means Justice For All 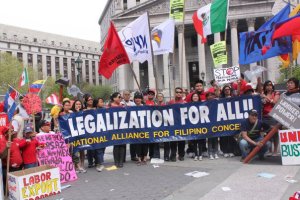 AB-NY/NJ with NAFCON at May 1st Rally in NYC

Anakbayan NY/NJ stands firm in the principle that providing undocumented immigrants a path to legalization that is appropriate to their economic conditions is the first and only step in attaining justice for the most oppressed sector in today’s American society.

The Migrant Struggle Should Adopt an Anti-Imperialist Perspective

At the root, migration is provoked by the lack of domestic industries, smothered by the grasp of Imperialist countries on third world countries, such as the Philippines.  For this, concerned sectors of society must ultimately take a stand against Imperialism and its neo-liberal policies that it imposes on our home countries.  Only by building an international anti-imperialist united front of migrant workers  and supporters against injustice and oppression can we truly win the struggle for equal rights for migrants and the people.

The International Migrants Alliance (IMA; www.internationalmigrants.org) is the first international grassroots organization that unites migrant workers under the anti-imperialist banner. Anakbayan encourages groups and organizations with similar aspirations to participate in IMA-USA’s founding assembly on October 23, 2011 in Queens, NY.

JUSTICE FOR MIGRANT WORKERS!
NO TO “SECURE COMMUNITIES PROGRAM”!
LEGALIZATION FOR ALL!
NO TO LABOR EXPORT POLICY!
### 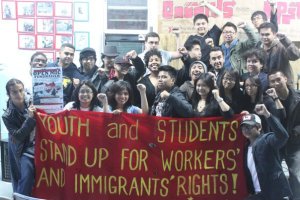 Anakbayan (in English: Sons and Daughters of the Nation) NY/ NJ is a comprehensive national democratic mass organization of Filipino youth. We fight for the rights and welfare of our fellow Filipinos at home and abroad. To contact us:
Email: anakbayan.nynj@gmail.com
Website: anakbayannynj.wordpress.com
Facebook: Anakbayan NJ
Anakbayan NY
Twitter: anakbayannynj