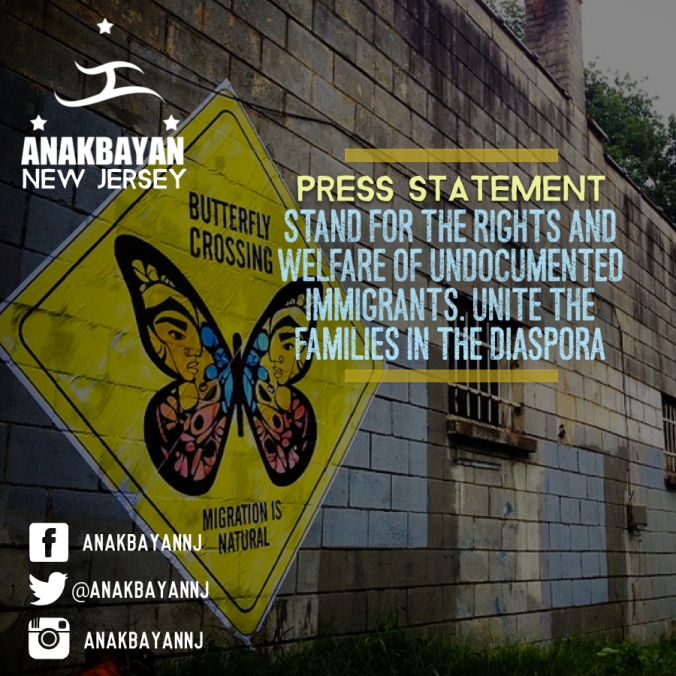 Stand for the Rights and Welfare of Undocumented Immigrants. Unite the Families in the Diaspora: Anakbayan NJ joins Saint Peter’s University vigil for un-documented immigrants

“We join the Saint Peter’s University community in solidarity of all migrants and refugees all over the world who are suffering under inhumane and repressive immigration policies. We demand justice and we stand for a world where families are not torn apart by the need to survive,” said Joelle Lingat, chairperson of Anakbayan New Jersey.

The vigil was called for in relation to the refugee crisis sweeping Europe and the ongoing struggles of undocumented immigrants here in the United States. According to the Organization of International Migration, around 700,000 refugees have arrived in Europe by sea. Most refugees are applying for asylum. Meanwhile, there are around 12 million undocumented immigrants in the United States and nearly two million have already been deported under President Obama’s tenure. Most of these immigrants are escaping poverty and wars in their home countries.

Similarly, the Philippines has seen 10 percent of its population migrate. Currently, close to 12 million Filipinos either live or work abroad. According to a New York Times article published last Nov.9, “No country exports more seafarers than the Philippines, which provides roughly a quarter of them globally. More than 400,000 Filipinos sought work last year as officers, deckhands, fishermen, cargo handlers and cruise workers.”

“This speaks to the state of employment in the Philippines. Filipinos are forced away from their families, away from their homeland in order to put a roof over their heads and to put food in their mouths. The fact that so many are left to choose a dangerous and uncertain path underscores the desperation for people to thrive economically, even at the most basic level,” says Melissa Harris, ABNJ member.

According to the young activists, these migration patterns are not coincidental, but rather a direct result of “Imperialism”. “There is no one else to blame for the horrible conditions faced by migrants and refugees around the world other than U.S. Imperialism. It is its wars of aggression waged in the middle east that destabilized the region and forced people to flee for their lives. It is its continued economic domination, in the form of various unequal trade agreements like the North American Free Trade Agreement and the current Trans Pacific Partnership Agreement that continues to impoverish the Third World and creates conditions for forced migration,” says Lingat.

Anakbayan New Jersey says this is more reason for youth and students to advocate for immigrants’ rights. “As seen in the struggle of undocumented students, only through organized struggle can immigrants uphold their rights. We call on immigrant youth and students to educate, organize and mobilize the larger immigrant community to fight for their immediate rights and link this to the global struggle against US imperialism. Only then can we end the system of forced migration,” Lingat concluded.

Jersey City, NJ- Filipinos around New Jersey gathered at the Pope Lecture Hall at Saint Peter’s University last Sunday to shed light to the particular struggles of Filipino immigrants and to discuss the recently released immigration reform bill. At the Forum titled “Panahon Na!” (Time is Now), Anakbayan New Jersey, a Filipino organization that organized the event, called on the Filipino community to organize and actively engage in the upcoming debate around immigration reform.

‘We’re in the same boat’

The panel was comprised of Catalina Adorno, a student at Saint Peter’s University and member of the Social Justice Club; Edna Sabino, a Filipina teacher; Chia-chia Wang, an advocate from the American Friends Service Committee (AFSC), Attorney Cristina Godinez, an immigrant rights advocate and lawyer, Hong-mei Pang of Revolutionizing Asian Immigrant Stories on the East Coast (RAISE), Hanalei Ramos, Northeast regional coordinator of BAYAN-USA, and Bea Sabino, chairperson of Anakbayan New Jersey. They talked about the wide array of experiences and hardships immigrants, documented or undocumented, face in the current immigration system.

“my experience as an immigrant has been difficult because not many people are welcoming of immigrants. Everyone makes the claim we are just here to steal their jobs. Jobs are being stolen from American citizens but not by immigrants- by corporations who are moving jobs into other countries in search for cheaper labor. That’s an entire issue in itself. I am just here to get an education.,” said Catalina Adorno, talking about the hardships of being an immigrant student. “As immigrants, our future is very uncertain.” Adorno concluded.

“My migration journey feels like a long wait at the doctor’s office, uncertain and anxiety-laden” said Edna Sabino, a pre-school teacher in Jersey City who migrated to the US in 2003 and was petitioned by an employer through an H1B visa. She is still waiting for her permanent resident card. She said “It is already hard for us to navigate the immigration current immigration system, I can just imagine how harder it is for those who are undocumented. Because of that I sympathize with the cause of undocumented immigrants. We are in the same boat,” referring to the struggle of undocumented and documented immigrants for immigration reform.

“My stance on immigration reform is that they [US government] should just do a better job at it because, as many of the speakers mentioned, people are still having a hard time bringing their families to America. It takes years for parents or children to get their visas,” said Rogie Borja, President of Asian American Student Union (AASU) at Saint Peter’s University said after attending the forum.

Updates on the Gang of 8’s Immigration Reform Bill

Speakers also discussed updates on the new immigration bill entitled “Border Security, Economic Opportunity and Immigration Modernization Act of 2013” released by the “Gang of 8”, a group of 8 senators from the republican and democratic party. According to the new bill, the new immigration system will put a “tough but fair path to citizenship” for qualified undocumented immigrants, it will shift from family-based to merit-based immigration allowing for in-demand low-skilled and skilled workers to come to the United States.

Hanalei Ramos, Regional Coordinator of BAYAN-USA said, “I really want us to support family reunification. I want us to be critical of the guest worker programs that are being proposed by the Gang of 8. I really want the deportations to end because people have the right to feel safe in their own communities, and to reap the benefits and rewards of the lives that they built in this country.”

A Call to Action for Filipinos

“My family and I are experiencing first hand how isolating and disempowering migration can be under the current system. We have been waiting for Green Cards for 7 years now. As one of the fastest growing immigrant groups in the US, Filipinos have their migration stories as testament to what comprehensive immigration reform should be,”  shared Bea Sabino, chairperson of Anakbayan New Jersey, at the conclusion of the forum.

“We need a strong, united mass movement for immigrant rights to influence public policy. The Gang of 8 proposal proves that if we want genuine immigration reform, the people really do have to fight for it. We are urging the Filipino community to come out of the shadows, share their stories and join progressive Filipino organizations, such as Anakbayan, in guaranteeing equal rights to immigrants and an end to this modern day segregation of our schools, workplace and communities,” Sabino added

On May 1, 12 noon at Union Square, Anakbayan New Jersey, along with other Filipino organizations are calling on the community to march with them to demand a genuine immigration reform that reflects the needs of the Filipino community.